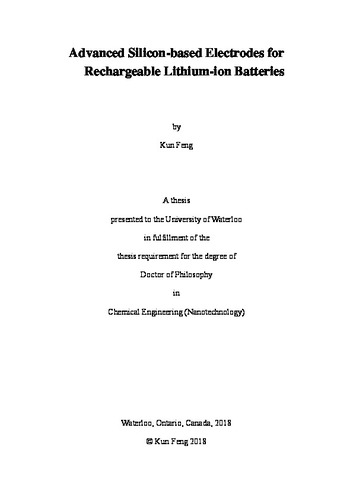 The pressing environmental and ecological issues with fossil fuels, together with their long-term unsustainability have driven a mighty quest for alternative energy sources. High-performance and reliable energy conversion and storage systems play a key role in the practical application of renewable energies. Among all the current energy conversion and storage technologies, lithium ion batteries (LIBs) have successfully dominated the consumer electronics market. In addition, LIBs have also been found in the application of transportation sector such as electric bicycles, various types of electric vehicles (EVs), and even in multi-megawatt-hour systems for the utility industry. However, the state-of-art commercial LIBs are still infeasible for widespread deployment in EVs due to their energy density limit and high cost for large battery packs. To increase the energy density of LIBs, which represents the ultimate objective of this thesis, traditional electrode materials need to be replaced by new materials with higher capacity and as-reliable performance. Silicon (Si) has been intensively studied as the anode material for LIBs because of its exceptionally high specific capacity. Compared to the widely commercialized graphite anode which displays a capacity of 372 mAh g-1, Si possesses a theoretical capacity of 4200 mAh g-1 upon full lithiation with the formation of lithium Si alloy Li22Si5. However, Si-based anode materials usually suffer from large volume change during the charge and discharge process, leading to the subsequent pulverization of Si, loss of electric contact, and continuous side reactions. These transformations cause poor cycle life and hinder the wide commercialization of Si for LIBs. The lithiation/delithiation behaviors of Si, as well as the interphase reaction mechanisms, have been progressively studied and understood. Various nanostructured Si anodes have been reported to exhibit both superior specific capacity and cycle life compared to commercial carbon-based anodes. However, some practical issues with Si anodes remain and must be addressed if to be widely used in commercial LIBs. To tackle the practical challenges facing Si anodes and achieve our objective of boosting the energy density of LIBs, several feasible approaches have been proposed, and specifically embodied in the projects displayed in this thesis. Main considerations behind these approaches include: preventing Si structure failure, enhancing electronic conductivity, forming stable electrode/electrolyte interphase. This thesis will begin with an overview on current energy challenges and motivations, followed by thesis objective and approaches. A comprehensive literature review is presented on LIB technology fundamentals, key components, and more importantly, peer works on the lithiation/delithiation behaviors of Si, research focuses on Si anode development, including engineering of Si architectures, and construction of Si-based composites. Chapter 3 introduces several important characterization techniques that are used throughout the completion of thesis projects, including both physical and electrochemical characterizations, and device assembly methods. In the first study, a highly efficient Si reduced graphene oxide carbon (Si-rGO-C) composite with good rGO wrapping of Si and an interconnected carbon network is developed for the first time. Adoption of Si NPs eliminates the possibility of Si structure failure. Compared with the regular Si-rGO composites with only Si NPs wrapped by rGO that have been previously reported, Si-rGO-C composite not only improves the electrical conductivity, but also enhances structure stability. In addition to the rGO wrapping on Si NPs, the additional carbon coating on the partially exposed Si NPs provides extra protection from Si volume change that may cause detachment from rGO sheets. Carbon rods between Si-rGO flakes function as conductive bridges, creating an effective conductive network on a larger scale. The initial capacity of Si-rGO-C composite reaches 1139 mAh g-1 at 0.1 A g-1, many times that of graphite. In addition, capacity retention of 94% is obtained after 300 cycles at 1 C. In the second study, a secondary micron-sized Si-based composite (MSC) is developed, with Si NPs embedded in a porous, conductive and elastic network constructed with carbon, and cured-and-crosslinked functional binder materials. The idea of combining nano-sized Si and conductive agents is extended to the construction of a well-defined spherical structure via a facile spray-drying process. With the careful heat treatment of the composite, the polymers crosslink via the dehydration reaction of functional groups and forms a robust structure. The polymeric chains are retained in the structure since a relatively mild temperature (250 °C) is selected. In addition to the structure benefits of this composite and therefore the electrochemical performance improvement over Si NPs, tap density of Si NPs is significantly improved via the formation of secondary micron-sized particles, eventually promoting the volumetric energy density of a LIB. More importantly, this facile methodology does not require a high temperature carbonization and is implemented with a highly scalable spray-drying process. In the last study, a secondary cluster with Si NPs embedded in an amorphous carbon and TiOX matrix (C-TiOX/Si) is developed. This project is in furtherance of the ideas adopted in the previous two projects, as it integrates Si NPs onto a secondary conductive network, while a better surface coating on Si is adopted for enhanced surface protection. In this project, the C-TiOX matrix is conformally formed on the surface of Si, which not only uniformly casts a protective layer on Si, but also combines nano-sized Si into micron clusters. Thickness of the coating layer can be easily tuned, and thus a good coating quality and cluster size can be readily achieved. The amorphous and defect-rich nature of the TiOX not only exhibits enhanced electronic conductivity over its crystalline counterparts, but also provides better elasticity and stress-release capability that can maintain the structural integrity over lithiation/delithiation of Si. The conformally-formed C-TiOX matrix protects Si from direct and repetitive contact with electrolyte and help form a stable solid electrolyte interphase on the outer surface of the cluster. The final chapter concludes the work in this thesis and provides recommendations for future research directions based on the scientific findings and experience gained through the completion of this thesis.