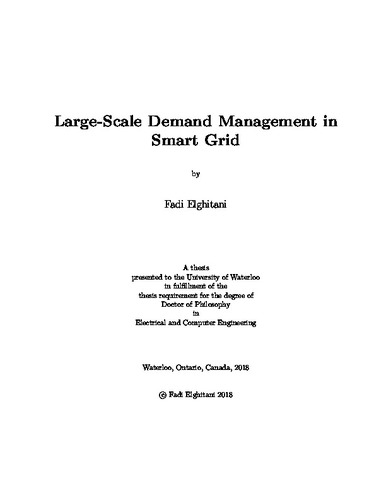 Future energy grids are expected to rely extensively on controlling consumers' demands to achieve an efficient system operation. The demand-side of the power network is usually constituted of a large number of low power loads, unlike energy production which is concentrated in a few numbers of high power generators. This research is concerned with supporting the management of numerous loads, which can be challenging from a computational point-of-view. A common approach to facilitate the management of a large number of resources is through resource aggregation (clustering). Therefore, the main objective of our research is to develop efficient load aggregation methodologies for two categories of demands: residential appliances and electric vehicles. The proposed methodologies are based on queueing theory, where each queue represents a certain category (class) of demand. Residential appliances are considered in the context of two demand management problems, where the first aims to minimize the energy consumption cost, while the second aims to reduce the magnitude of fluctuations in net demand, as a result of a large-scale integration of renewable energy sources (RESs). Existing models for residential demand aggregation suffer from two limitations:first, demand models ignore the inter-temporal demand dependence that is induced by scheduling deferrable appliances; Second, aggregated demand models for thermostatically-controlled loads are computationally inefficient to be used in DR problems that require optimization over multiple time intervals. Although the same aggregation methodology is applied to both problems, each one of them requires a different demand scheduling algorithm, due to the stochastic nature of RESs which is introduced in the second problem. The second part of our research focuses on minimizing the expected system time needed for charging electric vehicles (EVs). This target can be achieved by two types of decisions, the assignment of EVs to charging stations and the charging of EVs' batteries. While there exist aggregation models for batteries' charging, aggregation models for EVs' assignment are almost non-existent. In addition, aggregation models for batteries' charging assume that information about EVs' arrival times, departure times and their required charging energies are given in advance. Such assumption is non-realistic for a charging station, where vehicles arrive randomly. Hence, the third problem is concerned with developing an aggregation model for EVs' assignment and charging, while considering the stochastic nature of EVs' arrivals. Realistic models for residential demands and RES powers were used to develop the corresponding numerical results. The proposed scheduling algorithms do not require highly restrictive assumptions. The results proved that effectiveness of the proposed methodology and algorithms in achieving a significant improvement in the problems' objectives. On the other hand, the algorithm used in EV assignment requires restrictive Markovian assumptions. Hence, we needed to verify our proposed analytical model with a more realistic simulation model. The results showed a good compliance between both models. Our proposed methodology helped in improving the average system time significantly, compared to that of a near-station-assignment policy. This study is expected to have an important contribution from both research and application perspectives. From the research side, it will provide a tool for managing a large, diverse number of electric appliances by classifying them according to how much they can benefit the utility. From the application side, our work will help to include residential consumers in demand response (while current DR programs focus on the industrial sector only). It will also facilitate RESs and EVs on a large scale to help address environmental concerns.