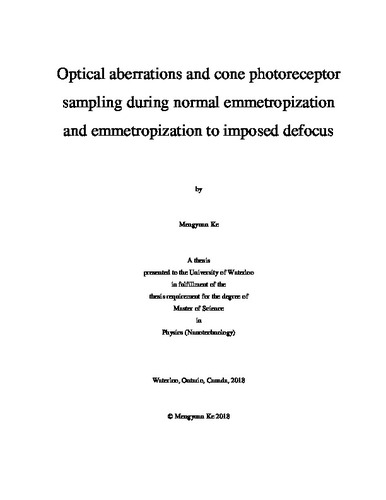 The eye grows in a coordinated fashion during normal emmetropization which results in an image close to being in focus on the retina for distance vision. Myopia results from the failure of normal emmetropization. Myopia increases the risk factors of a range of ocular diseases, such as retinal detachment, and is a leading cause of blindness. In addition, a rapidly increasing myopia rate has been reported in the last decade which requires more research into its mechanisms. Furthermore, understanding the mechanisms underlying normal emmetropization may lead to interventions that limit or prevent myopia. Instead of emmetropia, which equates with zero refractive error, a small nonzero refractive error following emmetropization has been reported in children, chicks and monkeys. Chicks are a popular animal model in which to study refractive development. When defocusing lenses are placed in front of the eye, the rate of eye growth changes to compensate the amount of defocus similar to normal emmetropization. Optical aberrations, which degrade the image quality of the eye, and cone photoreceptor sampling are important in studying the control of emmetropization. The right eyes of chicks were raised with positive (+10D) or negative (-15D) lenses while left eyes grew normally. Image quality degraded by optical aberrations and defocus was studied and compared to cone photoreceptor sampling in goggled eyes with the different lenses, and in control eyes. An image quality metric, equivalent blur, used here is a simpler calculation than other metrics calculated from point spread functions but still gives a good approximation of the radial extent of point spread function. Adaptive optics (AO) allows the longitudinal measurement of cone densities in vivo. The change of angular photoreceptor spacing with age in chick, measured and calculated from AO, was not affected by inducing either positive or negative defocus blurs. Thus, age changes in cone angular photoreceptor spacing do not appear to be influenced by optical blur. This spacing is compared for the first time to the extent of the optical blur on the retina. The minimum optically resolvable separation of two points (given by the Rayleigh criterion) achieved near the endpoint of refractive development matches the Shannon sampling resolution, given by the cone photoreceptor matrix. In turn, the minimum resolvable separation of two points is equal to the radius of the optical blur. The optical blur plateaus at the value which matches the limit of cone sampling. This may mean that the blur is no vi longer “visible” to the cones. This in turn may explain the nonzero refractive error found in chicks and possibly in monkeys and human. As previously found, astigmatism, particular oblique astigmatism increases in the eyes goggled with -15D lenses. At the time of and following the plateauing of optical blur, the presence of astigmatism generates a difference in the orientation of the PSF as the refraction varies in the goggled eyes goggled with positive or negative lenses over a short time period (with measured accommodation) and in control eyes with modeled accommodation. This orientation change can be resolved by the cone photoreceptors indicating that oblique astigmatism may provide a cue to the sign of defocus in goggled eyes and possibly in control eyes as well.