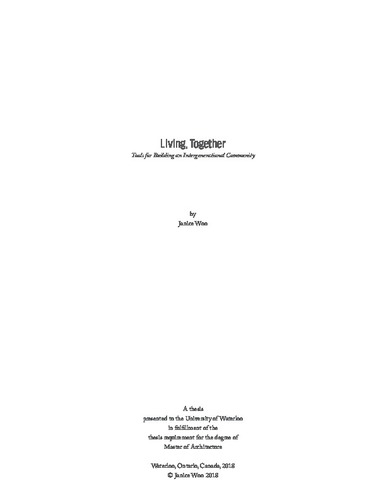 Population aging is poised to become the most critical global demographic shift of this century. Particularly in highly developed regions, the proportion of older adults is growing more quickly than other age groups as a result of rising life expectancy coupled with falling birth rates. Simultaneously, rural flight and the continuing growth of cities worldwide have resulted in more than half of the global population residing in urban areas for the first time in history. The intersection of these two patterns raises questions about how older adults fit into the existing urban narrative. In cities like Toronto, where the housing market is highly competitive and supply is focused on high-density housing targeted at young urban professionals, older adults are tacitly rejected from dense urban areas due to inadequate housing options. As they age and become unable to maintain a home independently, older adults become even more starved for choice and must turn to senior-specific housing. The mainstream condo market also fails to accommodate the growing number of Canadians who live in non-nuclear households, such as multi-generational families. To sustain a continually aging, urbanizing, diversifying population, Toronto’s housing market must aim to create more intergenerational communities, guided by a set of design principles that generate welcoming spaces for people of all ages and abilities. Using Toronto as a case study, this thesis deploys an intergenerational housing tool kit in the form of a mid-rise building located on the current site of a municipal surface parking lot in Kensington Market.