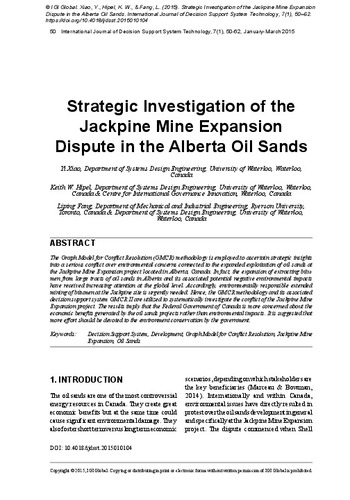 The Graph Model for Conflict Resolution (GMCR) methodology is employed to ascertain strategic insights into a serious conflict over environmental concerns connected to the expanded exploitation of oil sands at the Jackpine Mine Expansion project located in Alberta, Canada. In fact, the expansion of extracting bitumen from large tracts of oil sands in Alberta and its associated potential negative environmental impacts have received increasing attention at the global level. Accordingly, environmentally responsible extended mining of bitumen at the Jackpine site is urgently needed. Hence, the GMCR methodology and its associated decision support system GMCR II are utilized to systematically investigate the conflict of the Jackpine Mine Expansion project. The results imply that the Federal Government of Canada is more concerned about the economic benefits generated by the oil sands projects rather than environmental impacts. It is suggested that more effort should be devoted to the environment conservation by the government.