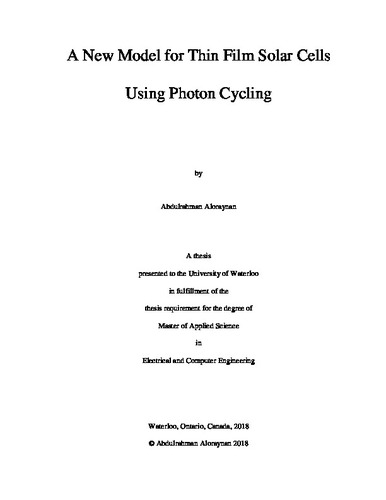 The solar energy has emerged as one of the most promising and reliable renewable energy resources attracting much attention to the study of photovoltaics. A principal aim of solar cells is to maximize the absorption of light to increase the generation of electron-hole pairs and harnessing it to increase the power generated. An attractive approach of increasing the generation rate in a thin PV cell by employing photon cycling. In this thesis, I report the results of my study using the updated solar irradiance, and a new model for calculating the generation rate in thin film solar cells. I develop a multiple light path model to arrive at a generation rate using my approximation of absorption coefficient and other physical structures at the back and front contacts. By increasing the path lengths, the generation of photocarriers at each level results in enhanced photocurrent. In calculating this, I have used a new approximation of the absorption coefficient as a function of wavelength. The consequence of the bandgap narrowing effect on the absorption coefficient has been studied using an existing model to show its impact on the generation rate. Furthermore, an optimized design for thin film solar cells is introduced to examine the photon cycling effect on the generation rate. It shows that considering the impact of photon cycling efficiently leads to enhancing the total generation rate by 144%. This permits reducing the thickness of the solar cell, which eventually reduces the cost of the cell. A novel model for accurate computation of the photon cycling effect has been developed, applicable to different semiconductor PVs. Finally, the photon recycling and the luminescent coupling effect are investigated to show an improvement up to 65% for the GaAs generation rate.