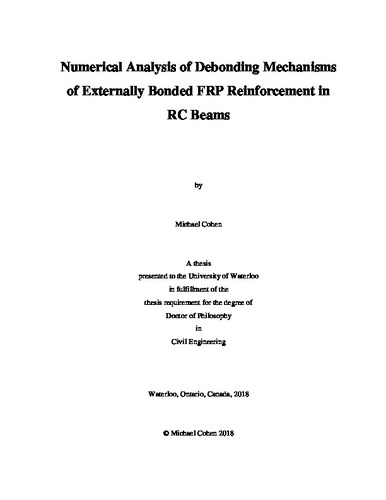 There is an urgent need to develop economic and efficient methods to repair and strengthen existing reinforced concrete structures. This demand is motivated by several factors including the aging of concrete structures, the desire to upgrade design standards, and the exposure to severe environmental effects. A particular problem confronting engineers in repairing deteriorated structures is the rehabilitation of reinforced concrete elements. Conventionally, steel plates were utilized to restore and enhance the tensile strength of damaged concrete members. Despite the effectiveness of this practice in terms of improving the structural capacity, it is still considered disadvantageous due to the excessive weight of steel and its susceptibility to corrosion in moist environments. The application of fibre reinforced polymer (FRP) to existing reinforced concrete structures has gained the interest of many researchers in the last few decades. These materials are superior to steel when it comes to comparing the resistance to electrochemical corrosion, strength-to-weight ratio, ease of handling, fatigue resistance, and availability in any length or shape. However, there is still a serious concern regarding the effect of premature debonding of the FRP plates before reaching the desired strength or ductility. This debonding can initiate from the ends of the plate or can be induced by intermediate cracks in the concrete member. Although the end-plate debonding and peeling mechanisms have been studied extensively, there is still a significant lack of data for FRP-strengthened beams in which intermediate crack-induced debonding is the dominant failure mode. On the other hand, the interfacial bond capacity between the concrete and the FRP composite has not been thoroughly investigated. Whereas, there is still need to study the effect of some of the mechanical and physical parameters on the bond strength of FRP-Concrete interface. Moreover, researchers have also shown a keen interest in simulating flexural cracks in concrete beams, and examine their effect on the debonding mechanisms of FRP materials. However, more realistic approach is needed to model cracks and account for their growth. In this study, a three-dimensional nonlinear finite element model was developed for simulating the flexural behaviour of RC beams externally bonded with FRP systems. The ABAQUS/CAE software version 6.14-2 was used for this purpose. This numerical analysis was performed based on a comprehensive experimental program conducted by Brena et al. (2003). The simulated RC beams were categorized in two groups: Control Beams (without fibre) and CFRP Beams (with carbon fibre reinforced polymer). During the process of constructing the CFRP beam models, two distinct procedures were followed to simulate the interface between the concrete and the externally attached FRP laminates. Perfect bond was assumed in the first approach, and a Cohesive Zone Model (CZM) was adopted in the second approach. In the latter, cohesive surface technique was implemented in the ABAQUS model through the use of traction-separation law. Despite the lack of quantitative evaluation in the literature as no similar techniques was attempted by others, the results of this numerical analysis were only compared with experimental findings, and the proposed models were found to be reliable. A parametric study was performed to investigate the influence of various parameters on the flexural capacity of the proposed beam model, and the debonding behaviour of the externally attached FRP laminate. This analysis was conducted by either changing the mechanical properties of some of the constitutive materials (e.g. concrete and reinforcing steel), or altering the geometrical and mechanical properties of the FRP reinforcement. It was then found that the effect of internal steel reinforcement ratio has the most impact on beam ultimate capacity. While changing the FRP bond length beyond a certain value bears no effect on beam strength. Moreover, the numerical model was modified to review the effect of intermediate crack spacings on the overall beam performance. A discrete crack approach was adopted to replicate crack propagation throughout the body of the beam. This technique has shown an approximately 30% improvement in the prediction capacity of this model when compared to a similar specimen in which smeared crack approach is used. The results of this analysis showed that the debonding behaviour of FRP laminates is largely influenced by crack spacing. In addition, the results have also indicated that the initiation of FRP micro-debonding was prolonged as crack spacings were decreased. This response can be attributed to the abrasion effect within the FRP-Concrete interface. Finally, this numerical analysis provides a relatively reliable guidance on the application and the mitigation of externally bonded FRP reinforcement in concrete beams. The predictive capability of the proposed FE models ensures their suitableness for further investigations of FRP effectiveness in civil engineering field.