The Perceptual Mechanisms of Probability Effects 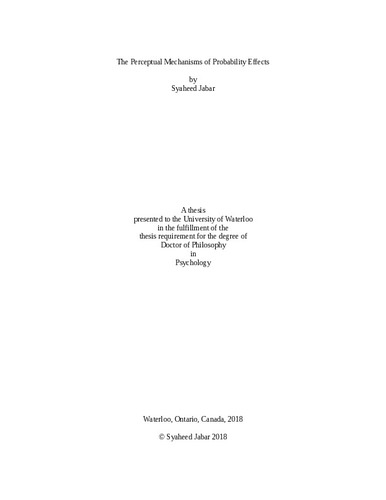 Environmental statistics impact human behaviour. The more likely something is to occur, the faster and more accurate we are at detecting it. This probability effect has been studied in numerous forms. However, there is no clear account of the mechanisms driving the effect. While attention and decision-making has been implicated, these interpretations largely hinge on the task employed. Instead, probability might have an earlier effect, one that is perceptual in nature. This thesis explores the idea that feature (e.g. orientation, color, etc.) probability shapes perception through selective tuning of the relevant neurons. Particularly, where orientation probability is involved, V1 neurons preferring the likely orientations are selectively sharpened. To test this hypothesis, a mixture of established tasks (Chapter 2) and novel behavioural paradigms (Chapters 3/4) were utilized. An electrophysiological examination specifically aimed at V1 was also carried out (Chapter 5). Neural modelling was then done to link the behaviour to a concrete neural mechanism, which generated predictions that could be evaluated by additional behavioural data (Chapters 6/7). These diverse methods provide converging evidence for the tuning hypothesis of feature probability, and argue for an interdisciplinary approach in cognitive research.