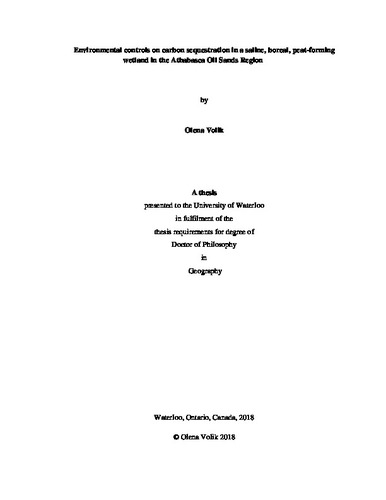 Saline boreal fens represent potential models for post-mining landscape reclamation in the Athabasca Oil Sands Region (AOSR) (Canada) where wetland construction is challenged by salinization. One of the key indicators of reclamation success is the accumulation of organic carbon within constructed fens, and a better understanding of the drivers of carbon sequestration in natural saline fens can be useful for advancing fen construction in this region. As such, this thesis aims to determine the main environmental controls on carbon uptake and its long-term storage in a saline boreal fen near Fort McMurray (Alberta, Canada) by: 1) reconstructing past salinity change; 2) determining relations between reconstructed salinity, hydrological conditions, vegetation and organic matter accumulation rates (OMAR) over the last ~100 years in open-water areas (ponds) within the fen; 3) investigating the effects of salinity, vegetation and hydrology on the long-term apparent rate of carbon accumulation (LARCA) within the peatland; and 4) assessing CO2 fluxes within the peatland and open-water areas. Past salinity change was investigated using paleolimnological analysis of sediment cores from three ponds situated within the fen. Salinity fluctuations were reconstructed using weighted-averaging transfer functions based on diatoms and an environmental dataset from 32 saline boreal ponds. Results reveal complex “precipitation – surface water – groundwater” interactions associated with differences in the hydrologic functioning of the studied ponds, and their connectivity with shallow groundwater aquifers and adjacent wetlands. Relationships between cumulative departure from mean precipitation (CDLM) and diatom-inferred (DI) salinity suggest that precipitation may control salinity both directly and indirectly. In ponds recharged predominantly by meteoric water, precipitation may govern salinity directly by dilution of salt content in water, so that increases in precipitation result in a salinity decline. In ponds situated within a saline groundwater discharge zone, salinity may be influenced by precipitation indirectly through recharge of the saline aquifer, so increases in precipitation lead to rises in salinity. Our study suggests that complex DI-salinity response to precipitation change, coupled with notable range of DI-salinity fluctuation within natural saline fens should be considered while designing saline constructed wetlands and predicting their potential resilience under climate change. Median OMAR (181 g m-2 yr-1) of the site suggests that ponds situated within saline boreal fens OMAR comparable to freshwater boreal and subarctic ponds, and reconstructed salinity levels (3–21 ppt) did not severely affect organic matter accumulation. Strong significant positive (Lager Pond), strong significant negative (South Pond), and weak insignificant (Pilsner Pond) correlations between OMAR and DI-salinity were observed, suggesting that relations between organic matter accumulation and salt content are not straightforward, and salinity was not the main control on OMAR. Macrofossil data showed that OM accumulation was mainly driven by water level, type of primary producers and pond regime. OMAR was the highest during the transition from peatland to ponds due to low decomposition rates resulting from high inputs of relatively resistant plant litter, and anoxic conditions. A macrophyte-dominated pond regime was associated with higher OMAR relative to phytoplankton-dominated regime. LARCA within the fen was studied using two peat sediment cores. Changes in LARCA in the less saline part of the fen correlate well with water table fluctuations and seem not to be affected by low salinity (EC< 5 mScm-1). The highest LARCA values are related to wet conditions; however, prolonged inundations coupled with high salinity (EC>10 mScm-1) appear to have negative effect on LARCA. In the southern more saline part of the fen relationships between LARCA and hydrology are complicated by salinity probably through the impact on the net primary productivity. The influence of salinity on LARCA is determined by salinity level, and there is a threshold value (probably 10 mScm-1) after which salinity can significantly affect “LARCA – hydrology” links. Mean LARCA of the site (19.7 gm-2 yr-1) is lower than in western continental fens, but it is comparable to the average rate reported for western Canadian peatlands. The northern less saline part of the fen has LARCA of 29.67 gm-2 yr-1 that is close to LARCA in rich fens, but LARCA in the southern part is considerably lower (9.79 gm-2yr-1). Environmental controls on net ecosystem exchange (NEE), ecosystem respiration (R), and gross primary productivity (GEP) within the fen were studied using community-scale CO2 measurements along a salinity gradient. Strong positive correlations between NEE, GEP, leaf area index (LAI), and vegetation biomass within terrestrial areas and strong positive correlation between GEP and vegetation density within aquatic areas illustrated importance of vegetation properties for carbon uptake. CO2 fluxes within peatland were driven primary by water table depth, and electrical conductivity as revealed by strong negative correlations between these variables and NEE, GEP, and R. Links between CO2 exchange and environmental factors were influenced by microtopographical differences, and additional controls (e.g., soil moisture, availability of magnesium, manganese and calcium) on NEE, GEP, and R were found within depressions. Strong negative correlation between R and water table depth (WTD), coupled with strong positive correlation between R and belowground biomass within ridges and no significant correlation between WTD and R within depressions possibly suggested predominance of root and/ or root-associated microbial respiration within depressions and prevalence of microbial respiration within ridges. Within open water areas, GEP and R were related to phosphate concentration as suggested by strong positive correlation. In contrast to terrestrial areas, EC had no relations to CO2 fluxes, and higher GEP was found in mesosaline ponds comparatively to hyposaline ones. This study revealed importance of development of appropriate planting schemes for terrestrial and open-water