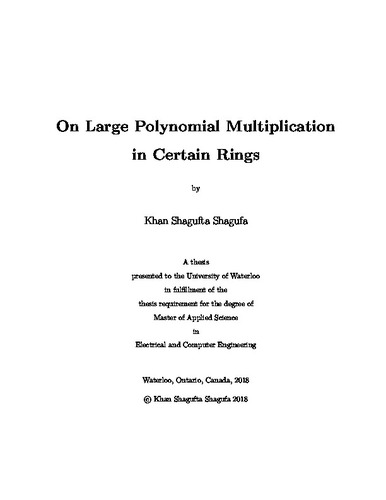 Multiplication of polynomials with large integer coefficients and very high degree is used in cryptography. Residue number system (RNS) helps distribute a very large integer over a set of smaller integers, which makes the computations faster. In this thesis, multiplication of polynomials in ring Z_p/(x^n + 1) where n is a power of two is analyzed using the Schoolbook method, Karatsuba algorithm, Toeplitz matrix vector product (TMVP) method and Number Theoretic Transform (NTT) method. All coefficients are residues of p which is a 30-bit integer that has been selected from the set of 30-bit moduli for RNS in NFLlib. NTT has a computational complexity of O(n log n) and hence, it has the best performance among all these methods for the multiplication of large polynomials. NTT method limits applications in ring Z_p/(x^n + 1). This restricts size of the polynomials to only powers of two. We consider multiplication in other cyclotomic rings using TMVP method which has a subquadratic complexity of O(n log_2 3). An attempt is made to improve the performance of TMVP method by designing a hybrid method that switches to schoolbook method when n reaches a certain low value. It is first implemented in Zp/(x^n + 1) to improve the performance of TMVP for large polynomials. This method performs almost as good as NTT for polynomials of size 2^(10). TMVP method is then exploited to design multipliers in other rings Z_p/Φ_k where Φ_k is a cyclotomic trinomial. Similar hybrid designs are analyzed to improve performance in the trinomial rings. This allows a wider range of polynomials in terms of size to work with and helps avoid unnecessary use of larger key size that might slow down computations.