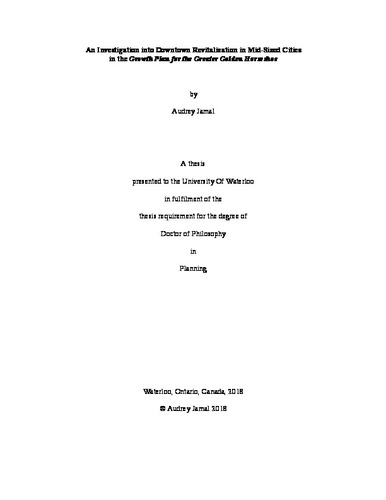 Twenty-first century cities are facing complex environmental, economic and social challenges. In growth areas like Ontario’s Greater Golden Horseshoe, the province has implemented a regional-scale plan to address the negative impact of unchecked urban sprawl and protect the region’s natural heritage. The Growth Plan for the Greater Golden Horseshoe (Ontario, 2006, 2017) aims to change the provincial planning paradigm by directing how and where growth can occur in cities. This effort, to create complete communities, enhance transit corridors and revitalize downtowns, is inclusive of eight standalone mid-sized cities that sit outside, or in the outer ring, of the province’s Greenbelt. This research explores the strategies that these outer ring mid-sized cities, with a history of core area decline, are using to foster local economic development, revitalize core areas, and achieve provincial population and employment targets by 2041. This research follows a three-manuscript format and offers one of the first empirical insights into how mandated growth planning is impacting mid-sized city downtowns in Ontario. The first manuscript uses the example of downtown Guelph to evaluate the impact of provincial growth targets on downtown revitalization. Findings from this case study suggest that provincial growth targets can have a catalytic effect on the planning paradigm in mid-sized cities. Through locally led community-planning efforts, and a range of site-specific incentives, mid-sized cities can begin to intensify their downtowns and reverse decades of core area decline. Manuscripts two and three leverage a local economic development framework, to explore the role that allied groups can play in implementing strategies to foster mid-sized city downtown renewal. Manuscript two looks at the role Business Improvement Areas (BIAs) play as partners to local economic development. Findings illustrate that incremental improvements are occurring in the downtowns of these outer ring mid-sized cities, and that BIAs, through a combination of operational activities, advocacy and broad-based coalition building, can contribute to urban revitalization by pursuing a downtown-first agenda. The final manuscript looks at the role that coworking, or shared workspaces, play in the downtown economies of mid-sized cities in Ontario. Findings tell the story of how economic change is playing out in the downtowns of these mid-sized cities, highlighting the importance of innovative, collaborative and inclusive approaches to city building and local economic development. Together these manuscripts illustrate the change that is taking place in Ontario’s mid-sized cities in the outer ring of the Greater Golden Horseshoe. Through a combination of top- down provincial planning and bottom-up local economic development initiatives, mid-sized cities can begin to reverse decades of core area decline. While these changes take time, this research confirms the importance of downtown allies and ongoing, incremental improvements to promote downtown revitalization in smaller metropolitan areas.

Audrey Jamal (2018). An Investigation into Downtown Revitalization in Mid-Sized Cities in the Growth Plan for the Greater Golden Horseshoe. UWSpace. http://hdl.handle.net/10012/13083