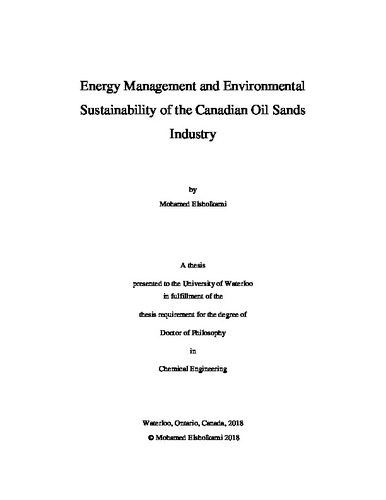 By 2030 the worldwide energy demand is expected to increase by twofold, in which fossil fuels inevitably will still play a major role in this transition. Canadian oil sands, the second largest proven oil reserves, represent a major pillar in providing energy and economic security in North America. Their development on a large scale is hindered due to associated environmental impacts, which include greenhouse gas emissions, water usage, and management of by-products of downstream operations (e.g. Sulfur, petroleum coke, etc.). In this work optimization techniques are employed to address the management of various environmental issues while minimizing the cost of operations of the oil sands industry. In this context, this thesis makes four principal contributions. First, an extensive review is conducted on potential production pathways of renewable energy that can be integrated in the energy infrastructure of oil sands. Renewable technologies such as wind, geothermal, hydro, bioenergy, and solar are considered the most environmentally benign options for energy production that would contribute in achieving significant carbon emissions reductions. A mixed integer non-linear optimization model is developed to simultaneously optimize the capacity expansion and new investment decisions of both conventional and renewable energy technologies, and determine the optimal configurations of oil producers. The rolling horizon approach is used for the consecutive planning of multiple operational periods. To illustrate the applicability of the model, it was applied to a case study based on operational data for oil sands operators in Alberta for the period of 2010 – 2025. Second, a generalized optimization model was developed for the energy planning of energy intensive industries. An extensive superstructure was developed that incorporates conventional, renewable, nuclear, and gasification of alternative fuels (e.g. petroleum coke, asphaltenes, etc.) technologies for the production of energy in the form of power, heat and hydrogen. Various carbon mitigation measures were incorporated, including carbon capture and sequestration, and purchase of carbon credits to satisfy emission targets. Finally, the superstructure incorporated the possibility of selling excess energy commodities in competitive markets. The superstructure is represented by a multi-period mixed integer optimization model with the objective of identifying the optimal set of energy supply technologies to satisfy a set of demands and emission targets at the minimum cost. Time-dependent parameters are incorporated in the model formulation, including energy demands, fuel prices, emission targets, carbon tax, construction lead time, etc. The model is applied to a case study based on the oil sands operations over the planning period 2015–2050. A scenario based approach is used to investigate the effect of variability in energy demand levels, various carbon mitigation policies, and variability in fuel and energy commodity prices. Third, a multi-objective and multi-period mixed integer linear programming model is developed for the integrated planning and scheduling of the energy infrastructure of the oil sands industry incorporating intermittent renewable energy. The contributions of various energy sources including conventional, renewable, and nuclear are investigated using a scenario based approach. Power-to-gas for energy storage is incorporated to manage surplus power generated from intermittent renewable energy sources, particularly wind. The wind-electrolysis system incorporates two hydrogen recovery pathways, which are power-to-gas and power-to-gas-to-power using natural gas generators. The model takes into account interactions with the local Alberta grid by incorporating unit commitment constraints for the grid’s existing power generation units. Three objective functions are considered, which are the total system cost, grid operating cost and total emissions. The epsilon constraint method is used to solve the multi-objective aspect of the proposed model. Fourth, extensive research has been done on the components that constitute the sulfur supply chain, including sulfur recovery, storage, forming, and distribution. These components are integrated within a single framework to assist in the design optimization of sulfur supply chains. This represents a starting point in understanding the trade-offs involved in the sulfur supply chain from an optimization point of view. Optimization and mathematical modeling techniques were implemented to generate a decision support system that will provide an indication of the optimal design and configuration of sulfur supply chains. The resulting single-period mixed-integer linear programming model was aimed at minimizing total capital and operating costs. The model was illustrated through a case study based on Alberta’s Industrial Heartland. A deterministic approach in an uncertain environment was implemented to investigate the effect of supply and demand variability on the design of the supply chain. This was applied to two scenarios, which are steady state operation and sulfur surplus accumulation. The model identified the locations of forming facilities, the forming, storage and transportation technologies, and their capacities. The contributions of this thesis are intended to support effective carbon mitigation policy making and to address the environmental sustainability of the oil sands industry.