Association between Social Marketing Interventions and Knowledge, Attitudes and Practices towards Consumption of Vitamin-A Fortified Oil in Rural Tanzania: A Quantitative and Spatial Analysis. 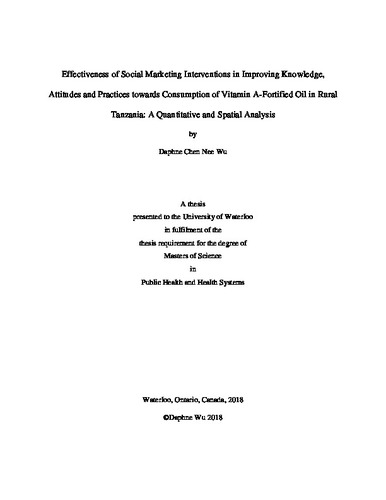 Background. Vitamin A deficiency (VAD) is a public health problem affecting many pregnant women and young children in Africa and South-East Asia. In children, VAD is associated with an increased risk of measles, malaria and other infectious diseases, and in pregnant women, it increases the risk of infant mortality and maternal morbidity and mortality. In 2010, 33 percent of children under 5 years and 37 percent of reproductive-aged women in Tanzania were vitamin A deficient. Hence, the Masava project was implemented to address VAD in rural Tanzania by enabling small and medium-sized sunflower oil processors to fortify unrefined sunflower oil with vitamin A and distribute it in the regions of Manyara and Shinyanga. To promote the fortified oil, a subsidy was provided via an e-voucher system. A social marketing campaign was also implemented to increase knowledge of vitamin A and promote consumption of the fortified oil. Purpose. To evaluate the effectiveness of the social marketing campaign in improving knowledge, attitudes and practices (KAP) regarding consumption of vitamin A-fortified sunflower oil. Methods. The study employed a quasi-experimental non-equivalent control group study design. In the intervention group, community mobilization events were conducted which included road shows, cooking shows, clinic shows, cultural shows, bicycle races and football matches, and print materials were distributed at health clinics and during events. The campaign delivered messages on health benefits of vitamin A and availability of vitamin A-fortified oil at a subsidized price. A radio campaign was also implemented towards the end of the intervention period. The control group did not receive any of the interventions until the endline survey was completed. To assess the impact of the campaign, two sets of surveys were undertaken to collect information on knowledge, attitudes and practices regarding consumption of the fortified oil: the household survey conducted by the Sokoine University of Agriculture and the survey conducted by the Tanzania Communication and Development Center (TCDC survey). Both surveys were carried out before and after the campaign. For the household survey, lactating women with children under 5 years were recruited before the interventions and were followed up after nine months of the 13-month campaign. For the TCDC survey, random samples of women and men were recruited for the baseline, midline and endline surveys. In the household survey, oil samples were also collected from each household and analyzed to determine the retinol content. The retinol content in the oil samples served as an indicator of fortified oil consumption in the household. Results. After nine months of intervention, consumption of inadequately fortified oil decreased significantly (p<0.05) and consumption of adequately fortified and over-fortified oil increased significantly in both the intervention and control districts. However, the change was smaller in the control districts than in the intervention districts. Knowledge of the health benefits of vitamin A improved significantly in both the intervention and control districts after the intervention, based on the household survey. Health clinics, radio and cultural shows were the most-frequently listed source of information on vitamin A for women, whereas for men, health clinics, radio and IEC materials were important. No significant association was found between distance of households to the nearest clinic show location and consumption of fortified oil at the household level, however there were effects on sales. Compared to retailers that had a clinic show held within 0.5 km from its location, the volume of fortified oil redeemed was significantly lower at those retailers that did not have a clinic show held within 3 km. Among the different kinds of events that were conducted, clinic shows and cooking shows were positively associated with the volume of fortified oil redeemed, whereas no association was found between either bicycle races or football matches, which were particularly designed and implemented to target men. Conclusions. The social marketing campaign was effective in improving KAP towards consumption of vitamin A-fortified oil. Clinic shows and cooking shows that target women were more effective in promoting KAP towards household consumption of fortified oil than interventions that target men.