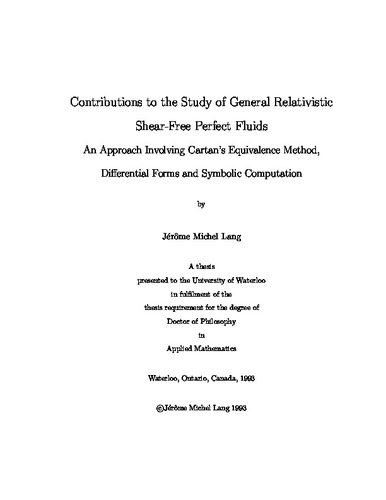 It has been conjectured that general relativistic shear-free perfect ﬂuids with a barotropic equation of state, and such that the energy density, µ, and the pressure, p, satisfy µ + p ̸= 0, cannot simultaneously be rotating and expanding (or contracting). A survey of the known results about this conjecture is included herein. We show that the conjecture holds true under either of the following supplementary conditions: 1) the Weyl tensor is purely magnetic with respect to the ﬂow velocity vector or 2) dp/dµ = −1/3. Any hypersurface-homogeneous shear-free perfect ﬂuid which is not space-time homogeneous and whose acceleration vector is not parallel to the vorticity vector belongs to one of three invariantly deﬁned classes, labelled A, B and C. It is found that the Petrov types which are allowed in each class are as follows: for class A, type I only; for class B, types I, II and III; and for class C, types I, D, II and N. Two-dimensional pseudo-Riemannian space-times are classiﬁed in a manner similar to that of the Karlhede classiﬁcation of four-dimensional general-relativistic space-times. In an appendix, the forms diﬀerential forms package for the Maple program is described.