Online mapping of EMG signals into kinematics by autoencoding 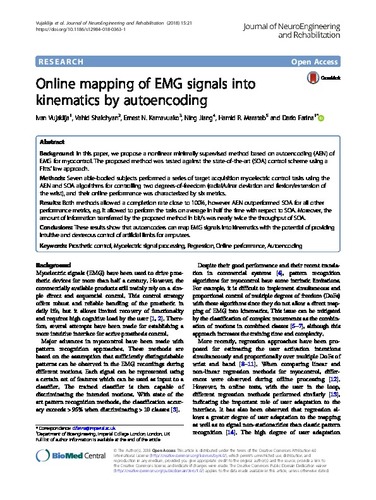 Background: In this paper, we propose a nonlinear minimally supervised method based on autoencoding (AEN) of EMG for myocontrol. The proposed method was tested against the state-of-the-art (SOA) control scheme using a Fitts’ law approach. Methods: Seven able-bodied subjects performed a series of target acquisition myoelectric control tasks using the AEN and SOA algorithms for controlling two degrees-of-freedom (radial/ulnar deviation and flexion/extension of the wrist), and their online performance was characterized by six metrics. Results: Both methods allowed a completion rate close to 100%, however AEN outperformed SOA for all other performance metrics, e.g. it allowed to perform the tasks on average in half the time with respect to SOA. Moreover, the amount of information transferred by the proposed method in bit/s was nearly twice the throughput of SOA. Conclusions: These results show that autoencoders can map EMG signals into kinematics with the potential of providing intuitive and dexterous control of artificial limbs for amputees.