A Critical Realist Approach to Evolutionary Path Dependence: The Role of Counterurbanite Entrepreneurs in Tourism Regions of Rural Newfoundland 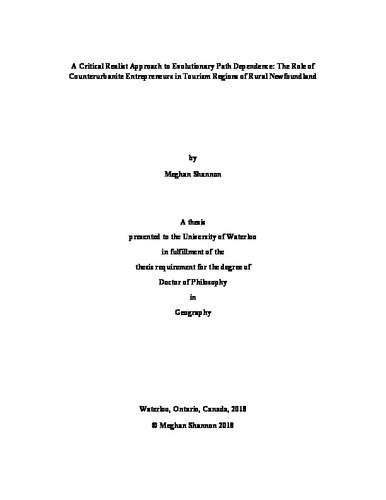 Path dependence has emerged as an approach to understanding economic decline in peripheral areas, consisting predominantly of space-based economic activities. Evolutionary economic geography is one lens through which transitioning path dependent locales, of industrial homogeneity, can be critically examined (Steen and Karlsen, 2014). This is because of the evolutionary nature of economic and social systems, which constitute the structures and conditions that largely dictate path dependent trajectories (Martin and Sunley, 2006). Some path dependent rural regions have been successful in creating new trajectories through tourism entrepreneurship (Brouder, 2014; Williams, 2013). This research investigates the evolution of one such path in a historically marginalized region of eastern Canada: rural Newfoundland. The purpose of this study is to determine the role of rural in-migrant entrepreneurs in unlocking two path dependent, peripheral areas, of rural Newfoundland: Brigus and Trinity Bight. More specifically, this study investigates the role that counterurbanites are playing in the development of a rural tourism trajectory, their motivations and residential histories, and, their impacts on local capacity building and job creation. The study is guided by a critical realist paradigm, which allows for an explanatory analysis of event causation, in an open, but stratified, socio-economic system. Findings are threefold. First, it is determined that the civic sector (i.e. non-profit groups, individual volunteers) plays an important role in initiating tourism path-creation; second, both regions are found to have low numbers of local resident tourism entrepreneurs; and, third, only one of the two regions investigated showed signs of tourism clustering through path-extension and path-renewal. These three events, respectively, are causally linked to: a) anxieties of resettlement, lack of economic alternatives, community cooperation, and a strong sense of community identity; b) lack of entrepreneurial spirit, and new primary sector opportunities; and c) newcomers’ outside perspective, desire for belonging, and uninhibited cognitive/political ‘lock-in’ to the island’s socio-economic history. The generative mechanisms responsible for producing these events include: a) Newfoundlanders’ unique collective diasporic identity; b) path-reversion; and c) geographic isolation and peripheral barriers.