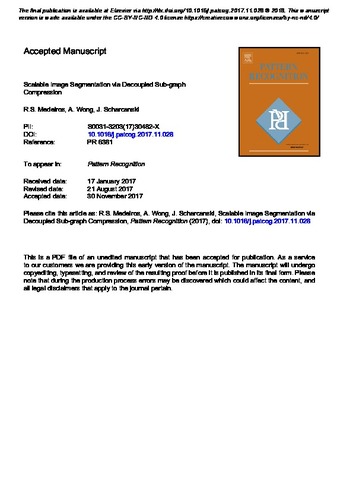 Dealing with large images is an on-going challenge in image segmentation, where many of the current methods run into computational and/or memory complexity issues. This work presents a novel decoupled sub-graph compression (DSC) approach for efficient and scalable image segmentation. In DSC, the image is modeled as a region graph, which is then decoupled into small sub-graphs. The sub-graphs undergo a compression process, which simplifies the graph, reducing the number of vertices and edges, while keeping the overall graph structure. Finally, the compressed sub-graphs are re-coupled and re-compressed to form a final compressed graph representing the final image segmentation. Experimental results based on a dataset of high resolution images (1000 × 1500) show that the DSC method achieves better segmentation performance when compared to state-of-the-art segmentation methods (PRI=0.84 and F=0.61), while having significantly lower computational and memory complexity.