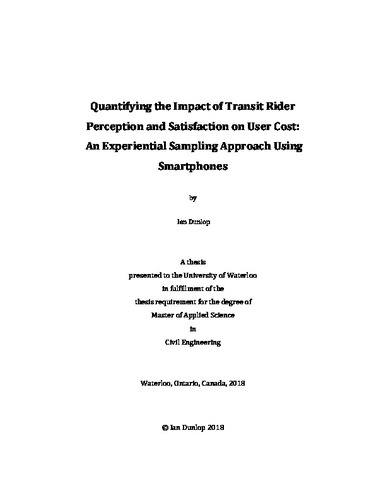 The aim of travel demand modelling is to accurately estimate trips in future time periods by understanding current travel behaviours. Accurate generalized cost modelling for determining transit mode share has proven elusive. Arbitrary weight factors are used to adjust models to reflect real world modal split. It is believed that what is missing are incorporating perceptual influences, and more generally, how the satisfaction associated with a mode of transport plays into making transit a less cost-competitive and desirable travel alternative than cost models predict. This research uses experiential sampling method to capture a transit rider’s perception of satisfaction in real-time by using their own smartphone as an observer. Supplemental data collected by the smartphone’s built in technologies also enable tracking the rider’s movements, linking perception to a physical point. A smartphone application was developed and tested to gather their perceptions and satisfaction of transit system performance. Data from the application were spatially matched to the transit authority’s own automatic vehicle location and passenger count data to validate on-time performance and service loads. The results demonstrated that while a smartphone application is an effective way to collect data in real-time, and a rich dataset was produced, transit rider satisfaction is not as easily quantified as expected. Each individual has their own perceptions of what it means to be satisfied in experiencing their daily activities. Satisfaction is more effectively inferred through qualitative observation, rather than asked directly. However, the results show correlations between satisfaction and transit system performance, attributes, and the rider’s sensitivity to time. Participants reported significantly lower levels of satisfaction with their trip experience when their perceived wait time was longer than actual wait time. Deploying this application to a diverse population sample may help to identify the triggers of transit rider dissatisfaction and anxiety towards determining a cost penalty against transit modal split, and where investments can be made to improve the rider experience. However, satisfaction is revealed to be a subjective concept that is difficult to measure directly.