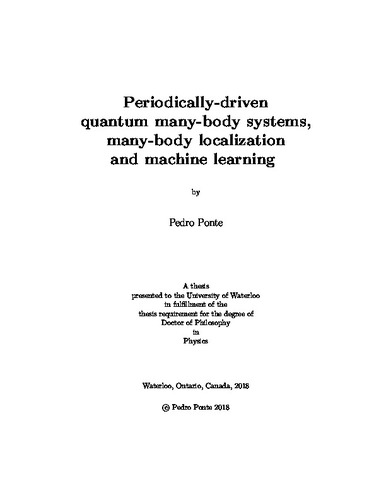 Despite the exponentially large amount of information required in the quantum description of many-body systems, finite size numerical simulations have paved the way for recent progress in the understanding of quantum phases of matter both in and out-of-equilibrium. In this spirit, using exact diagonalization for a small number of spins ~ 20, first, we investigate the fate of both ergodic quantum many-body systems that thermalize at long times and systems with quenched disorder that exhibit many-body localization (MBL) and fail to thermalize (due to an extensive set of local conserved degrees of freedom) under periodic driving. Ergodic systems always delocalize in energy space and heat up to infinite temperature, for both local driving, in which the time dependence of the Hamiltonian is restricted to a few contiguous degrees of freedom, and global driving. On the other hand, MBL systems remain localized at finite energy density for local driving, while in the case of global driving these systems can either heat up to infinite temperature or remain localized depending on the parameters of the drive. Underlying the latter is the emergence of an effective time independent MBL Hamiltonian describing the long time dynamics of the system. These numerical predictions have recently been verified experimentally in a one dimensional quasi-disordered optical lattice of interacting fermions wherein unitary time evolution can be experimentally probed. Subsequently, we study the stability of MBL systems with respect to another perturbation, in this case by thermal inclusions, which remains poorly understood. We consider a simple model to address this question: a two level system interacting with 𝑁 localized bits subject to random fields. In the large 𝑁 limit, the localized bits are thermalized for any nonzero ratio of interactions to disorder strength. Moreover, at finite 𝑁, in the transition region, the single-site eigenstate entanglement entropies exhibit bimodal distributions, so that localized bits are either "on" (strongly entangled) or "off" (weakly entangled) in eigenstates. The clusters of "on" bits vary significantly between eigenstates of the same sample, which provides evidence for a heterogenous discontinuous transition out of the localized phase in single site observables. These results also imply the MBL phase is unstable in systems with short-range interactions and quenched randomness in dimensions 𝑑 that are high but finite. The second part of this thesis is motivated by the recent breakthroughs of artificial intelligence in domains such as computer vision involving highly dimensional data of complexity not unlike the one found in the description of many-body systems. Using Monte Carlo simulations to generate synthetic data, we find that kernel methods, a class of machine learning algorithms, can learn the mathematical form of physical discriminators associated with phase transitions, such as order parameters and Hamiltonian constraints, for a set of two dimensional spin models: the ferromagnetic Ising model, a conserved-order-parameter Ising model, and the Ising gauge theory. Our work shows that the combination of numerical simulations with the ability of machine learning algorithms for automatic feature detection hold promise to become standard tools in the exploration and characterization of different phases of matter in condensed matter and other many-body systems.