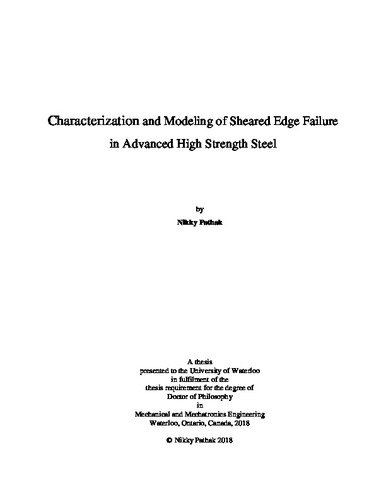 Edge failure is one of the major problems associated with forming of advanced high strength steels (AHSS) such as dual-phase (DP) steels. The development of ferritic-bainitic steels such as complex-phase (CP) steels have improved the performance of AHSS in industrial forming operations and is gaining attention in academia as well as industry. As a result, there is an interest in developing numerical techniques to predict sheared edge failure in forming simulations and optimize forming operations in the automotive industry for vehicle lightweighing. The primary objective of this thesis is to examine the influence of shearing on edge stretchability and damage evolution in two different grades of AHSS: CP and DP steels and develop damage-based models to predict sheared edge failure. The stretch-flangeability of DP and CP steels were evaluated using a hole expansion test for different edge conditions to isolate to the influence of a range of factors thought to influence edge formability. The results demonstrate that work hardening and void damage at the sheared edge govern formability while the sheared surface quality plays a minor or secondary role. A comparison of the edge stretching limits of DP and CP steels demonstrates the advantages of a ferritic-bainitic microstructure for forming operations with severe local deformation as in a stretch-flanging operation. The failure mechanisms in the CP and DP steels were systematically characterized by interrupting hole tension tests at different strain levels. Scanning electron microscope (SEM) analysis conducted on interrupted hole tension specimens revealed the ductile failure mechanism as being operative in the CP and DP steels for the different edge conditions and microstructures. Damage histories were developed from the interrupted samples using optical microscopy and quantitative stereology measurement of void nucleation, growth and coalescence, paired with in situ digital image correlation (DIC) strain measurements during the mechanical testing. The trend of damage evolution differs for the sheared edge in contrast with the reamed edge because the shearing process alters the microstructure in the shear affected zone (SAZ) by introducing work-hardening and damage behind the sheared edge. Two independent experimental techniques were applied to characterize the residual strain distribution within the shear-affected zone for CP800 and DP780 steels based on (a) the tendency of grains to orient in the direction of shearing and (b) work-hardening introduced within the deformed shear zone. The first technique was developed by applying finite strain theory to calculate the equivalent strain from microstructural measurements of grain rotation. The second strain measurement technique also involved using the same interrupted shear tests and DIC strains followed by microhardness measurements to develop a correlation between the equivalent strain and hardness. These techniques were applied to estimate the strain-distribution behind the sheared edge generated during the shearing process. The influence of stress-state on micro-void nucleation was evaluated experimentally for the CP and DP steels and a stress-state dependent nucleation model was developed. Stress state was varied by considering four specimen geometries: the equi-biaxial Nakazima test, a plane strain v-bend test, a central hole tension test for uniaxial loading and a simple shear test. 3D micro-tomography and quantitative stereology measurement of void nucleation paired with in situ digital image correlation (DIC) strain measurement was conducted on the interrupted samples to quantify damage as a function of equivalent strain. The influence of stress-state on damage evolution was observed for both materials with very little void nucleation under shear deformation but extensive void damage under biaxial tension. Of particular interest, Lode parameter-dependency of void nucleation was identified and a stress-state dependent nucleation model is proposed by introducing a nucleation strain surface as a function of stress-triaxiality and Lode parameter using a modified form of Chu and Needleman nucleation criterion. The critical damage parameters controlling the ductile failure process were identified from the void histories determined using 3D tomography to develop a micromechanics-based fracture model. An uncoupled anisotropic damage-based fracture model was formulated within an LS-DYNA user-defined material subroutine. The pre-strain and damage introduced during the shearing process were mapped onto finite element models of edge formability. The proposed model was validated for the hole tension experiments and found to predict failure efficiently and accurately for the CP800 and DP780 alloys with a reamed or sheared edge conditions.