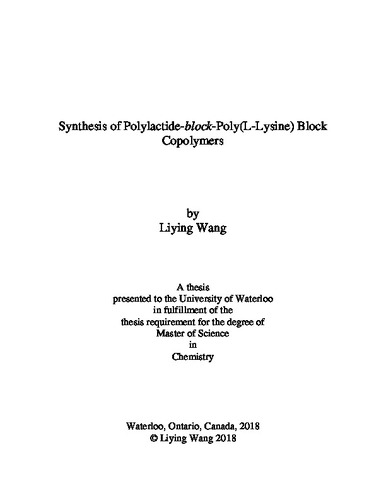 Polylactide (PLA) is an important biodegradable, biocompatible and renewable material that has been studied for many years for biomedical applications such as tissue scaffolding and surgical sutures. The research project described in this Thesis focused on the synthesis of polylactide-block-polylysine (PLA-b-PLy) amphiphilic block copolymers designed for use in targeted drug delivery systems. Block copolymers with a cleavable, redox-sensitive disulfide bond at the block junction, as well as non-cleavable block copolymers were synthesized for comparison. The molecular weight of the PLA and the PLy blocks in the copolymers was varied, so as to control their hydrophobic/hydrophilic balance, and ultimately their self-assembly behavior. A novel redox-sensitive initiator, tert-butyl (2-((2-hydroxyethyl)disulfanyl)ethyl) carbamate, was used to generate the redox-sensitive copolymers, whereas (3-(Boc-amino)-1-propanol served for the non-cleavable systems. The hydroxyl group of these compounds was activated with the non-metallic catalyst 1,8-diazabicyclo[5.4.0]undec-7-ene/benzoic acid (DBU/BA) to initiate the ring-opening polymerization (ROP) of lactide. After the polymerization of lactide and removal of the Boc protecting group at the end of the PLA chain, the free primary amine functionality was used to initiate the ring-opening polymerization of N6-carbobenzoxy-L-lysine N-carboxyanhydride (Z-protected L-lysine NCA monomer). Sample analysis by size exclusion chromatography (SEC) and proton nuclear magnetic resonance (1H NMR) spectroscopy confirmed that the block copolymers had low polydispersity indices (PDI) and the expected molecular weights. Deprotection of the Z-lysine units of the copolymers was accomplished with HBr, but degradation of the PLA segment could not be avoided under the reaction conditions investigated. It is suggested that future investigations either rely on a different deprotection method for the Z-group, or that a different protecting group be used in the NCA monomer serving to build the PLy block.