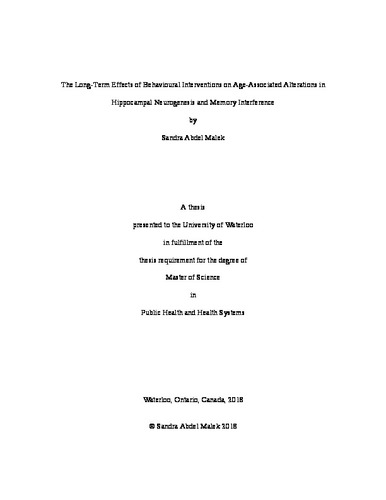 The process of normal aging results in changes in several cognitive abilities, including the ability to reduce interference between similar pieces of information upon recall. Aging has also been associated with changes in the hippocampus, including suppression of adult hippocampal neurogenesis, which may be associated with age-related changes in memory interference reduction. Behavioural interventions such as exercise and environmental enrichment, on the other hand, have been shown to stimulate adult hippocampal neurogenesis. The present study therefore used an animal model to assess the long-term effects of exercise and environmental enrichment on memory interference reduction and adult hippocampal neurogenesis in the aging dentate gyrus. Old rats were randomly assigned to standard cages, cages equipped with a running wheel, or enriched cages. Young rats were housed in standard cages and used as a control. All rats received BrdU injections at the start of the new housing conditions. Following nine months of the intervention, all rats were tested on a delayed nonmatching to place (DNMP) radial arm water maze task (RAWM) with a high interference component. On trials with the highest interference, old control animals performed significantly worse compared to young controls. No differences were found between young controls and old animals in the exercise or enrichment groups, suggesting that these behavioural interventions may have a protective effect against age- related deficits in interference reduction. Cellular analyses revealed significantly greater BrdU- labeled neurons at ten months post-injection in young controls compared to all aged animals, regardless of intervention. Results indicate that neurons generated in adulthood are capable of surviving for at least ten months, although aging significantly reduces survival regardless of behavioural intervention. Findings indicate that behavioural interventions implemented in middle age seem to be capable of preserving cognitive abilities later in life, although the mechanism by which this occurs remains to be further investigated.