Cycling in a Changing Climate: An Examination of the Effects of Weather and Climate Change on Cycling Frequencies in Southern Ontario 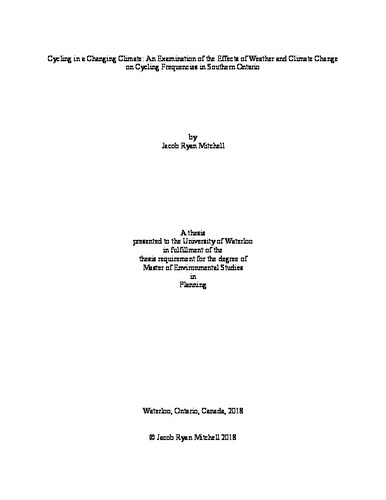 This thesis contributes to the knowledge-base of how commuter cycling frequencies are impacted by current weather conditions, and what effects climate change will have on them by mid-century. Numerous studies have focused on the effects of climate change on passive modes of travel (e.g. automotive, locomotive, aviation), with less attention devoted to active transportation, such as cycling. As the climate changes through the 21st century, it is important to develop an understanding of how commuter cyclists are affected by weather and what these impacts will look like under future conditions when planning for modern and accessible cities. This research applies this reasoning to contribute to filling-in a geographic void in southern Ontario where there is a current lack of knowledge on this topic. Publicly available weather and cycling count data for Waterloo, Ontario, is used to analyze the effects of several weather variables on commuter cyclists at present and predicted at mid-century using a generalized linear regression model. The model results for present-day impacts were consistent with findings in other research: that adverse conditions (e.g. rain and snow) negatively affect cycling frequencies, while increased temperatures and a lack of precipitation generally result in a positive change, however the rates of change varied depending on the trail location in the City of Waterloo. Under the climate change analysis, the results contest the numerous studies conducted outside of southern Ontario that indicate cycling frequencies will increase under a changed climate by suggesting that they will decrease as the effects of climate change intensify. The findings of this research may contribute to the understanding of the numerous factors that influence cycling frequencies and provide planners with a tool to effectively apply investments in infrastructure and to programs that will seek to encourage adaptation to the impacts of weather and climate change identified here.

Jacob Mitchell (2018). Cycling in a Changing Climate: An Examination of the Effects of Weather and Climate Change on Cycling Frequencies in Southern Ontario. UWSpace. http://hdl.handle.net/10012/13024