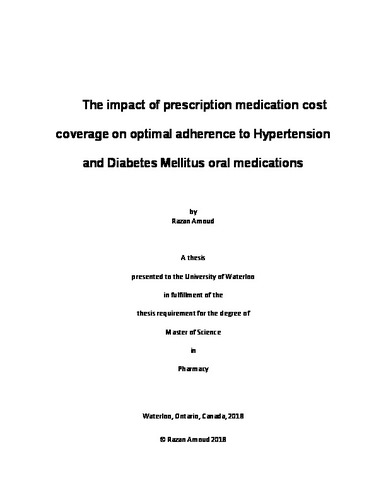 Background: It can be difficult for patients who do not have prescription medication cost coverage to adhere to their medications. No previous study has examined the time-trend and impact of absence of coverage on adherence to oral diabetes and hypertension medications in Canada. Methods: Using data from the Canadian Community Health Survey cycles 2007, 2008, 2013, and 2014, I included individuals from participating provinces that opted to include questions about coverage (Ontario and New Brunswick). Included adults had either hypertension or diabetes and answered questions on both coverage and adherence to medications. A multivariate-adjusted logistic regression model was fitted to estimate the odds of non-adherence depending on coverage. I adjusted for confounding variables including demographic factors (socioeconomic status; age, education, sex, province of residence), and health system and behaviour variables (such as smoking, having a regular doctor, not receiving a flu shot, as well as having additional comorbidities). Results: The pseudo-cohort included 23,215 individuals. The weighted average age was 60 years. 20% of participants reported absence of coverage. This percentage increased slightly over the study period. Patients with no prescription medication coverage were at 23% higher odds of not adhering to their medication (adjusted odds ratio (OR) 0.77; 95% CI (Confidence Interval) 0.657 - 0.911). Subgroup analysis revealed that patients aged less than 65 years, lived in Ontario, and had a middle-income were also at a statistically significant lower odd for adherence with absence of insurance. Conclusion: Absence of prescription medication coverage is associated with a reduced adherence to diabetes and hypertension oral medications. Providing medication coverage may help in increasing the probability for adherence. As such, there is a need for further studies to quantify the effect of recent changes of provincial insurance coverage.