The Sockeye Special: Reimagining the Arbutus Corridor for a Resilient Vancouver 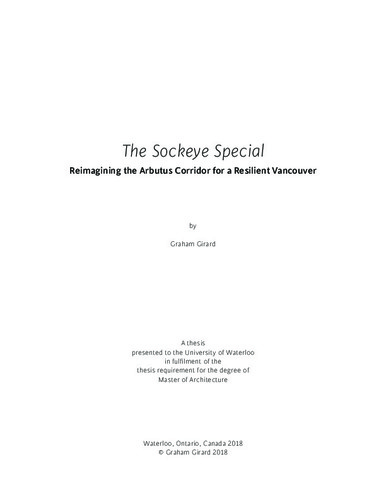 An underutilized ribbon of land cuts through the urban fabric of Vancouver, British Columbia. Known as the Arbutus Corridor, it is the right of way for a rail line that once connected industry on opposite sides of the city. Since the last train rattled down the line in 2001, the land has sat idly waiting for a new purpose. It is a familiar scene in postindustrial cities across North America, where landscapes of defunct infrastructure serve as a reminder of once thriving economies powered by industries that have since shifted to the periphery or overseas. This urban condition has prompted a range of responses that aim to breathe new life into these discarded spaces. Vancouver has long been recognized as a leader in this postindustrial redevelopment movement, and cities around the world now emulate Vancouverism as the model for their own development. Yet, the Arbutus Corridor remains a stranded rail link snaking through the urban milieu. At just under ten kilometers in length and eighteen hectares in area, the corridor remains one of the largest unutilized spaces in the city. Running north to south from False Creek to the Fraser River, the linear site cuts a complete transect through several diverse neighbourhoods of the city. Through these studies, the thesis will propose a reimagined Arbutus Corridor that responds to the complexity of modern urban systems and activates the collective needs and aspirations of city dwellers in the 21st century metropolis.