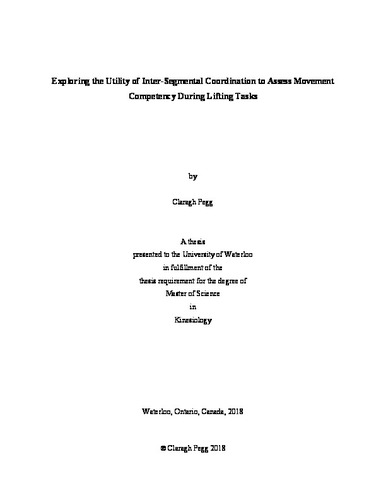 Pre-employment screens are used within the hiring process to determine the hiring or placement of employees in the workplace. It is important that such screens adequately replicate or generalize to the work of interest. The objective of this study was to determine if individuals move similarly in the Epic Lift Capacity (ELC) test, a common pre-employment screen, compared to how they move when lifting during a long-duration work simulation, where movement was characterized as inter-segmental coordination. Twenty participants (7 males, 13 females) performed the ELC test, which uses a psychophysical approach to determine a participant’s perceived maximum lift capacity, proceeded by a 90-minute work simulation. Using motion capture data lumbopelvic, hip, and knee Relative Phase Angles (RPAs) were calculated using trunk and lower limb segment angles and velocities. The Mean Absolute Relative Phase (MARP) was calculated to quantify the overall coordination pattern of each joint in each trial, while the deviation phase (DP) was calculated to quantify variability in joint coordination within a trial. Measures of coordination were calculated and averaged over the first three lifts (initial lifts) and last three lifts (final lifts) of the 90-minute work simulation and were compared to the coordination measures associated with the lifts in the ELC test. Height (floor-shoulder, floor-knuckle, and knuckle-shoulder) and load (4.54 kg, and 75% of a participant’s maximum) were controlled across conditions. Results from this study show that when considering coordination broadly across all joints, coordination was most in-phase and least variable at the lumbopelvic joint relative to the more distal joints. Also, no differences were found between the ELC test and work trials at the lumbopelvic joint, suggesting that movement, at least about the lumbopelvic joint, was controlled similarly in the ELC test and simulated work trials. Considering the high incidence rate of lower back injuries in the workplace (Statistics Canada, 2014), investigation into the stability and coordination of movements at the lumbopelvic joint is of interest, and it is reassuring the lumbopelvic motion is similarly controlled in work as it is when performing the ELC. In contrast, at the hip and knee the coordination patterns were generally less in-phase (higher MARP) and showed more variability (higher DP) during the ELC test compared to both the initial and final lifts; however, differences at the knee appeared to be modulated by both height and load. In contrast, lumbopelvic joint coordination only changed between the initial and final lifts within the 90-minute simulation, as the final lifts were less in-phase than in the initial lifts. The coordinative changes seen in this study may reflect functional organismic and task constraint differences between the tasks. Functional organismic constraints, such as fatigue or boredom may have resulted in coordinative changes over time in the work simulation, whereas task changes, such as task goal or objective, may have resulted in coordinative changes in the ELC test compared to the work simulation. Due to these apparent coordinative differences with changes in the participant and task, movement may be influenced by psychological, physical, and environmental factors, acting as constraints by altering movement outcomes (Glazier, 2017; Newell, 1986). These constraints may be important to incorporate into the future design and use of pre-employment screens when movement strategy is of importance, as changes in coordination did occur in this study, with small changes in objectives or over time, despite identical structural environmental design.