No Man's Land: The American military landscape as the new American park 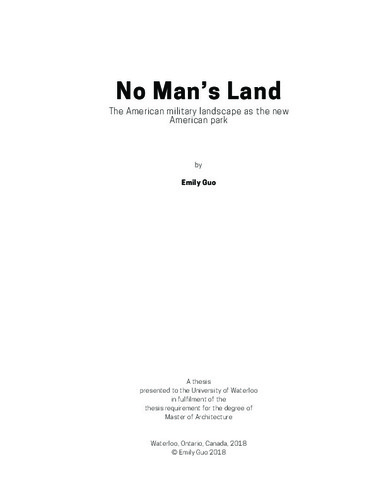 Military landscapes are seldom seen as ecologically diverse territories, full of life. Yet, there is growing evidence that these volatile lands are finding a second life as animal refuges, born out of necessity under the growing effects of the Anthropocene and sixth wave of mass extinction. It is the very nature of the military landscape – weaponized, contaminated, protected – that deters regular human activity and allows this new, damaged Nature to appear. These new cyborg landscapes tell a story of a post-human future where new ecological relationships are formed between the military artefacts and the animals that inhabit the land. These artefacts range from chemical contamination to landmines, nuclear fallout to defensive perimeters. Although this is a worldwide phenomenon, the thesis focuses on the United States in recognition of their $598.5 billion military-industrial complex that places them at the forefront of this investigation. No Man’s Land presents two test sites to illustrate these new complex relationships: Johnston Atoll (closed/ abandoned) and Rocky Mountain Arsenal Wildlife Refuge (closed/reused). By recognizing the ecological importance of these landscapes, the thesis argues to re-introduce these territories back into the American imagination as the ‘involuntary park’ – a kind of posthumanist National Park. A series of interventions have been proposed to leverage human engagement by reaching out to the civilian public under the guise of ‘voluntourism’ to further encourage animal occupation. The thesis aims to interrogate the contradictory nature of these landscapes and question their future in an increasingly anthropocentric world.