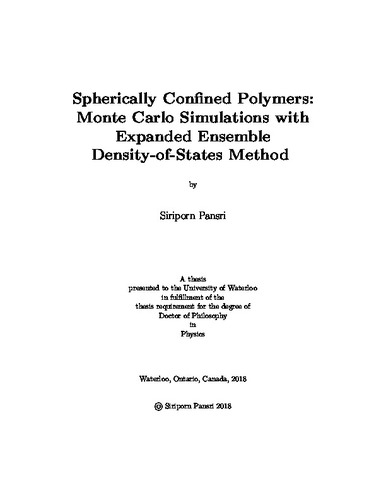 In this thesis, the Expanded Ensemble Density-of-States (EXEDOS) method - a combination of the Wang-Landau and Expanded Ensemble Monte Carlo algorithms is employed to investigate spatial conformations of a polymer chain under spherical confinement. The study focuses on flexible chains up to 600 monomers and semi-flexible chains with various stiffnesses up to 300 monomers in length. Spatial conformations of the polymer are studied, using a simple pearl-necklace chain model of varied diameter and stiffness, as well as the model of fused-sphere chain. To test the applicability of the EXEDOS method, the confinement free energy was calculated for ideal and non-ideal flexible chains inside spheres of sizes smaller than their unconfined size. For ideal chains, the power-law dependence of the free energy on a confining radius is in excellent agreement with previous theoretical predictions. For self-avoiding chains at intermediate concentrations, the dependence of free energy on concentration deviates from that predicted by the blob scaling theory, most likely due to the finite size effects. At high concentrations, a stronger dependence of free energy on concentration is observed, compared to that obtained at intermediate concentrations. The density profile of a self-avoiding flexible chain was also studied, showing that at sufficiently high concentrations, excluded volume interactions push the chain close to the confining surface, leading to an oscillation in monomer number density near the surface. In semi-flexible chains, bending energy experiences largest changes at low densities as the polymer folds to conform the confining sphere, and at high density its growth slows down as the chain starts forming ordered layer near the surface. We observe isotropic-nematic (I-N) transition for all considered polymer chains. The I-N transition of more flexible chains happens at higher densities than that of stiff chains. All chains form disordered to imperfect helicoildal structures, and at densities above the I-N transition, the structure with four +1/2 defects is observed in all considered chains. However, the polymer spatial arrangement is far from an ideal tetrahedral and tennis ball structure. The EXEDOS algorithm is further extended to investigate the effects of steric hindrance on the structure in a semi-flexible chain, spherically confined at various concentrations. Semi-flexible chains modeled as pearl-necklace chains with ratio of diameter to bond length d/a less than or equal to 0.5 did not develop ordered structures at any considered concentrations, while chains with d/a = 0.8 and d/a = 1, formed imperfect helicoildal structures. On the contrary, a semi-flexible fused-sphere chain with monomer overlap (d/a = 2) forms distinct helicoildal structures, when confined in- side a small sphere of the same size as the pearl-necklace chains with d/a = 0.8 and 1. The evolution of ordered parameters with concentration suggests that during the transition from disordered to ordered configuration, the fused-sphere chain with d/a = 2 and pearl-necklace chains with d/a = 1 and 0.8 may approach tetrahedral configuration before shifting to a helicoildal arrangement. Four +1/2 defects are observed in these chains confined at concentrations above the I-N transition, forming in places, where horizontal and vertical stands of polymer intersect. In the fused-sphere chain, the two +1/2 defects nearly merge in each pair to form a +1 defect at each pole.