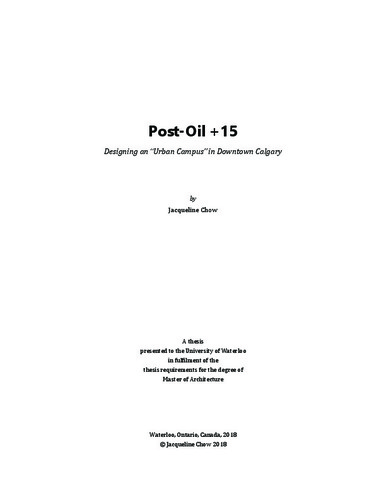 Calgary, Alberta is a city that is economically dependent on the petroleum industry. The inevitable boom and bust cycle surrounding the petroleum industry frequently disrupts Calgary’s socioeconomic health. Since the most recent downturn in 2014 caused by a drop in oil prices, the downtown region has suffered from a decline of buildings, jobs and population. As the administrative centre of the petroleum industry, the city core has been depleted of activity both in the public realm and in private office towers. The desolate state of downtown Calgary is not merely the result of the instability of the oil market, but is also due to the lack of success of the “+15 system” in creating a cohesive urban centre. The +15 system, a network of walkways which connect office towers through a series of elevated bridges, removes the pedestrian from the streets and renders the public realm inactive. The question of economic sustainability and urban renewal has challenged the policies of Albertan politicians, with many advocating strengthening alternative industries outside of oil and gas. As a response to this potentially diverse future economy, this thesis explores how the modern university can actively engage in the process of industry diversification by creating spaces that connect academic, social and economic activity. By transforming the +15 system from an isolated path into an “urban campus”, this proposal aims to activate and connect the horizontal public and vertical private realms.