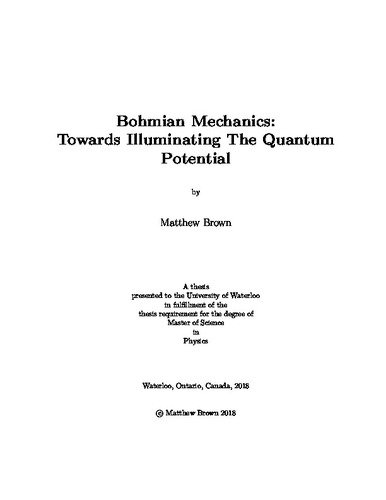 This thesis deals with the theoretical and experimental details of trying to understand and infer the quantum potential from Bohmian mechanics using Bohmian trajectories. In this work, some of the key components of the history of Bohmian mechanics is given, a theoretical explanation of how to measure the Bohmian potential, followed by an overview of the experimental apparatus and its components. Some tests of the experimental apparatus are then presented followed by a discussion of the results. Lastly, some interesting follow up experiments are de ned and discussed. Bohmian mechanics, while completely agreeing with quantum mechanics could not be more di erent from the standard notions such as the fact that particles retain their classical identity of a point like object that have de nite and causal trajectories. In this realm, rst developed by de Broglie, these particles move and are guided by a wave, which turns out to be the wave function itself. Typically, the velocity of the particles anywhere in space is given by spatial derivatives of the phase of this wave and the energy content of the particles is given by the temporal derivative. The trajectories can bend even when there are no outside (classical) forces that are acting on the objects. This is due to the fact that these observations of Bohmian mechanics must conform to the standard measurements in quantum mechanics. One detail that has gone unmeasured (in the sense of inference) in a laboratory setting, is the quantum potential (the mysterious force that moves particle to make sure they reproduce the measurements of quantum mechanics). Using the technique of measuring the trajectories of photons, the question was asked, can the quantum potential for single photons in the double slit be inferred? A setup has been built in order to try and answer this question using a single photon detecting camera and a heralding spontaneous parametric down conversion source. Unfortunately, the quantum potential still goes unmeasured due to noise in the camera pictures destroying the integrity of the signal and an interesting problem of trying to stitch together the quantum potential at the varying z-planes.