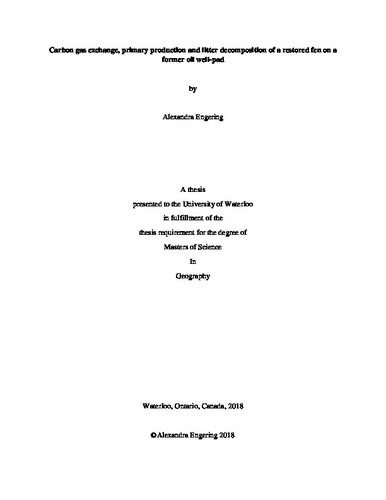 Over 500,000 oil and gas wells have been drilled in Alberta. Recently updated peatland restoration criteria for well-pads creates incentive for peatland restoration, but little is known about functional outcomes of restoration methods. A valued primary function of peatlands is slower decomposition than production rates resulting in peat and carbon accumulation and net neutral or negative greenhouse gas balance. Three restoration techniques on an abandoned well-pad near Peace River, Alberta were measured for carbon dioxide (CO2) and methane (CH4) emissions during three growing seasons in 2014-2016 (May-Sept, inclusive), 2-4 years post-restoration. Net primary production (NPP), biomass and decay rates were also measured in the fourth year post-restoration. The peat replacement treatments (PRT) and restoration methods included burying the mineral-pad layer underneath the peat layer (clay), burying the mineral layers with some mixing with peat (mixed), and removing the mineral fill layer completely (peat). Seasonal measurements showed some variation between PRTs from year to year for mean gross ecosystem production and ecosystem respiration, while net ecosystem exchange and CH4 fluxes were similar between all PRTs in all years, water table position (WT), soil temperature and vegetation cover explained variation in CO2 exchange, while WT explained some variation in CH4 flux. All PRTs increasingly developed peatland vegetation cover by the third year and had CO2 and CH4 fluxes comparable to the reference sites, despite having significantly different WT position to reference sites. It is likely, however that the reference results were non-representative of the ecosystem level as the similarity in CO2 fluxes would likely not exist if not for the absence of tree photosynthesis captured in plot scale understory CO2 measurements. Decomposition, biomass and NPP also did not differ significantly between PRTs. When compared to natural sites, NPP and biomass, were lower on the restoration site, likely due to the lack of tree establishment to date. Water table and soil temperature did not explain variation in NPP, or decomposition rates on site; however, ion supply rates (Al, Ca, Cu, Fe, K, Mg, Mn, NO2, NH4, P, S, Zn) were correlated to both in some cases. Overall, it is likely that the remnant mineral layer on the site altered peat chemistry, which was seen in abnormally high base cation supply rates. The high ionic availability combined with significantly shallower WT may explain greater decomposition rates compared to reference sites. It is expected that carbon cycling is not restored to that of natural peatlands, as supported by NPP and decay rates different from literature, as well as the drastically different site chemistry. All PRTs are recommended for future restorations as they do show promise for restoring peatland ecosystem functions, however, more research is needed to assess differences in PRTs carbon cycling and peat accumulation in restored peatland. Longer term restoration research should be continued until similar rates are found as on natural peatlands. Future research should involve single PRTs per well-pad for CO2, CH4, litter decomposition and production rates and incorporate the overstory carbon gas exchange of treed natural references.