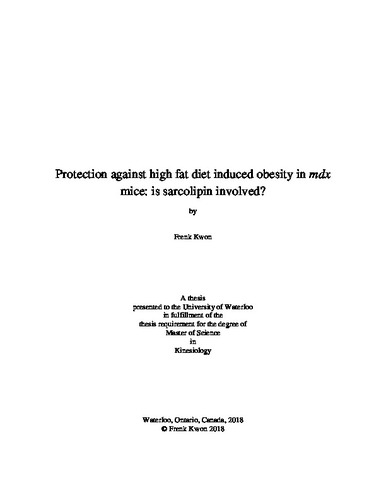 Sarcolipin (SLN) is a 31 amino acid proteolipid and one of the regulators of sarco(endo)plasmic reticulum Ca2+-ATPase (SERCA) pumps. Previous research has shown that sarcolipin levels in muscles from wild type (WT) mice increase 2-3 fold in response to consuming a high fat diet, possibly to help mitigate obesity by increasing energy expenditure and burning excess calories. The role of SLN in diet-induced thermogenesis was shown in subsequent studies via high fat feeding of Sln-null mice. In response to consuming a high-fat diet (HFD), Sln-null animals have significantly greater mass and adiposity, in addition to poorer glucose handling, compared with WT mice. Higher than normal levels of SLN have also been found in mdx mice, a murine model of Duchenne muscular dystrophy. Interestingly, it was reported that mdx mice are protected from obesity after high fat feeding. The purpose of this thesis was two-fold: (1) to determine if mdx mice fed a Westernized diet are protected from diet-induced obesity, and (2) to determine the role of SLN in protecting mdx mice against diet-induced obesity. WT, mdx, and mdx/Sln-null mice consumed a Westernized high-fat diet (42% kcal from fat) for 8 weeks while measurements of body weight and food consumption were made on a weekly basis. Glucose tolerance testing (GTT) and measurements of whole body daily metabolic rate with the comprehensive laboratory animal monitoring system (CLAMS) were performed before and after the diet protocols. Western blotting was conducted to determine the relative expression levels of SLN in diaphragm (DIA) and uncoupling protein (UCP)-1 in brown adipose tissue (BAT) from all animals. Fat pads were collected to calculate relative adiposity to determine the level of obesity in all animals. As expected, in response to the high-fat diet, mdx but not mdx/Sln-null mice gained less weight and adiposity (P< 0.05) in comparison to WT mice. Compared with mdx mice, mdx/Sln-null mice did not gain more weight but were more obese (P< 0.05) following the high-fat diet. Whole body metabolic rate (ml O2/kg/hr) was higher (P< 0.05) in mdx mice in comparison to WT and mdx/Sln-null mice before and after the high-fat diet, which may explain the lower diet-induced obesity in mdx mice. With increased obesity, mdx/Sln-null mice became extremely (P<0.05) glucose intolerant, more so than WT and mdx mice. Interestingly, mdx mice saw no change in glucose tolerance when compared with pre-HFD values, suggesting that mdx mice were protected from HFD-induced glucose intolerance. Western blotting analyses revealed SLN content was 2-fold higher in chow-fed mdx mice compared to chow-fed WT mice. Although SLN expression in DIA remained higher in mdx compared with WT post-HFD, it decreased in response to the high-fat diet in mdx mice and was unchanged in WT mice. UCP-1 expression was found to be higher (P<0.05) after the high-fat diet in all three genotypes, but there were no significant genotype differences in UCP-1 expression despite mdx/Sln-null mice having greater BAT weights compared with mdx mice. Altogether, these results suggest that SLN could play a role in adaptive diet-induced thermogenesis in mdx mice and provide protection against diet-induced obesity and glucose intolerance. However, despite the higher (P<0.05) daily VO2 in mdx compared to mdx/Sln-null mice post-HFD, both saw a non-significant differences in absolute sleeping VO2 comparison to pre-diet values. Thus, it is possible that other thermogenic mechanisms may have caused the increase in resting VO2 of mdx/Sln-null mice.