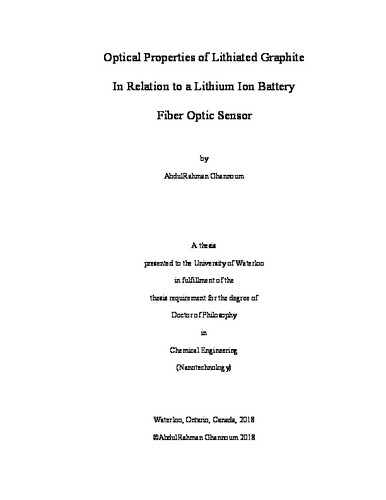 As the demand for lithium-ion batteries (LIBs) has increased, research to increase their life and reliability has also continued. To further advance the ability of determining the material status of a battery during operation, this research work has stepped into a new direction that may pave the way for future developments in sensors that monitor battery material changes during operation. Graphite is the most commonly used anode material and its phenomenal optical changes, which has fascinated many researchers, has inspired this research work and supported the development of a new type of electric battery cell sensor that utilizes an optical fiber to monitor the degree of lithiation within the battery cell. The ability to characterize the material within the battery during operation through optical data may allow the production of a smarter battery pack with the ability to perform in various environments and enable a higher level of understanding of its state-of-charge and state-of-health. In this work, the implementation of a fiber optic evanescent wave sensor for LIBs is optimized and analyzed using a newly developed model. The reflectance of commercial graphite electrodes charged to 30, 35, 40, 45, 50, 60, 65, 70, 75 and 80 % SOC was measured to determine the role of graphite particles in governing the colour of commercial graphite electrodes in the visible and infrared range (500 – 900 nm). The reflectance of commercial graphite electrodes was found to be most sensitive to lithiation in wavelengths ranging from 750 to 900 nm, which is the near-infrared band. Using a modified Swagelok cell, in-situ fiber optic evanescent wave spectroscopy (FEWS) was performed on a graphite electrode during electrochemical lithiation and found to closely follow the reflectance of commercial graphite electrodes. The FEWS study also demonstrated a direct correlation between transmittance through the optical fiber and the SOC of the LIB. The most sensitive wavelengths ranged from 750 to 900 nm. The transmittance through the fabricated optical fiber was found to be unaffected when in contact with LIB electrolytes (i.e., 3:7 (vol %) ethylene carbonate and dimethyl carbonate) at salt (LiPF6) concentrations ranging from 0.25 to 1.50 M. The fiber optic evanescent wave sensing system was optimized for ultimate commercialization by focusing on three aspects. The first is the etching of the fiber optic evanescent wave sensor (FOEWS). Experimental results demonstrated that a buffered hydrofluoric solution consisting of 40 wt % ammonium fluoride (NH4F) solution and 49 wt % hydrofluoric acid solution in a ratio of 6:1 was superior to a solution of 49 wt % hydrofluoric acid in producing durable sensors. Maximum sensitivity of the FOEWS within a LIB was achieved when the etched sensor produced about 92 % transmittance loss in 100 % glycerol. The second aspect of optimization was aimed at reducing capacity fade and maximizing the contact between the sensor and the graphite electrode. This was achieved by shifting from a Swagelok test cell to a pouch cell designed to permit an optical fiber to pass through it while maintaining a hermetic seal and embedding the FOEWS within the graphite electrode. The final pouch cell configuration constituted a more commercially viable setup with reduced weight and increased capacity. The third major development was the use of an in-house narrow band optical sensor interrogator, which replaced the spectrometer and reduced the cost of the sensing system significantly. The theoretical basis for the developed LIB sensing system was investigated to allow for deeper understanding of its abilities. A linear optical model for graphite was developed. The model assumes a linear change from the normal dielectric constants of graphite to LiC6 (fully lithiated graphite). This optical model was used to estimate the reflectance, refractive index and extinction coefficient of graphite as the concentration of intercalated lithium changes. The measured reflectance of graphite electrodes was compared with calculated values, based on the developed graphite optical model, and found to display similar trends. The optical model was then coupled with a lithium-ion battery transport model and a previously developed analytical optical model for the FOEWS to simulate the transmittance (signal) of the fiber optic sensor, with an estimated cladding thickness of 1.28 μm. Simulations produced trends comparable to experimental results and suggested that the lithiation rate around the FOEWS may occur at a higher rate than the rest of the graphite electrode. The effect of lithium diffusion at the surface of graphite particles on the FOEWS transmittance was observed by implementing two hours of rest at one hour intervals during the charging and discharging process of a LIB. The effect of lithium diffusion on the FOEWS was observed to be most significant during the initial discharge of a fully charged LIB, when the lithium concentration within the graphite particles is the greatest. The FOEWS was then tested using three distinct applied currents (i.e., C/5, C/8 and C/16) and found to deviate at the extremities (i.e., near 0 and 100 % SOC). The slope of the FOEWS transmittance over 33 cycles was observed to have three distinct peaks during a charge from 0 to 100 % SOC. Deviation from the “three peak” trend in the slope during a charge was found to be correlated to capacity fade. This demonstrated the ability of the sensor to predict significant capacity fade during a charge prior to observing the faded capacity during a full discharge. Finally, a method to estimate the cladding thickness of the FOEWS was presented, which utilizes the “comprehensive glycerol test” and FOEWS analytical model. The presented work provides a direction for future work that would further promote the commercialization of the developed sensing system. Based on the deeper understanding of the factors contributing to the optical signal gained during this research, a battery state-of-charge and-health estimation algorithm can be developed and tested for its accuracy. Comparing the cost of this sensing system to conventional methods would demonstrate its competitiveness and support its use in various applications.