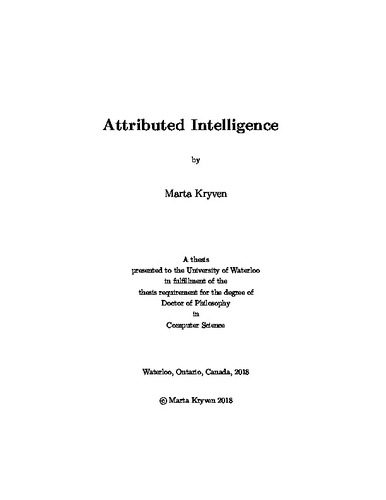 Human beings quickly and confidently attribute more or less intelligence to one another. What is meant by intelligence when they do so? And what are the surface features of human behaviour that determine their judgements? Because the judges of success or failure in the quest for `artificial intelligence' will be human, the answers to such questions are an essential part of cognitive science. This thesis studies such questions in the context of a maze world, complex enough to require non-trivial answers, and simple enough to analyse the answers in term of decision-making algorithms. According to Theory-theory, humans comprehend the actions of themselves and of others in terms of beliefs, desires and goals, following rational principles of utility. If so, attributing intelligence may result from an evaluation the agent's efficiency -- how closely its behaviour approximates the expected rational course of action. Alternatively, attributed intelligence could result from observing outcomes: billionaires and presidents are, by definition, intelligent. I applied Bayesian models of planning under uncertainty to data from five behavioural experiments. The results show that while most humans attribute intelligence to efficiency, a minority attributes intelligence to outcome. Understanding of differences in attributed intelligence comes from a study how people plan. Most participants can optimally plan 1-5 decisions in advance. Individually they vary in sensitivity to decision value and in planning depth. Comparing planning performance and attributed intelligence shows that observers' ability to attribute intelligence depends on their ability to plan. People attribute intelligence to efficiency in proportion to their planning ability. The less skilled planners are more likely to attribute intelligence to outcome. Moreover, model-based metrics of planning performance correlate with independent measures of cognitive performance, such as the Cognitive Reflection Test and pupil size. Eyetracking analysis of spatial planning in real-time shows that participants who score highly on independent measures of cognitive ability also plan further ahead. Taken together, these results converge on a theory of attributed intelligence as an evaluation of how efficiently an agent plans, such that depends on the observer's cognitive abilities to carry out the evaluation.