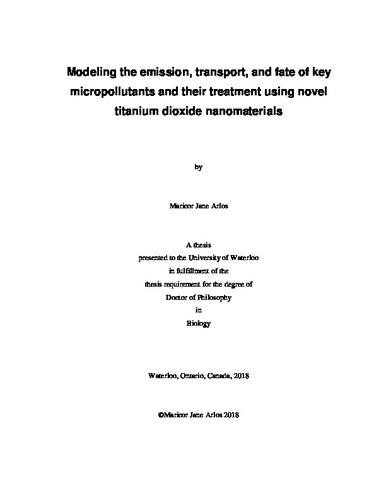 Endocrine disruptive effects in fish have been observed in many watersheds worldwide. The presence of intersex (ova-testes) in particular is well-documented in the Grand River watershed in southern Ontario, and is associated with estrogenic compounds discharged from wastewater treatment plants (WWTP). However, this linkage is hard to establish since no exposure data are available to suggest the relationship. In addition, the presence of estrogens in trace amounts has become a major challenge in their analytical detection and this problem is often intensified by matrix effects. Bioassays can be employed to determine the total estrogenicity in environmental samples, but the identification of specific chemicals causing the activity is still often required. In the absence of chemical and biological activity data, modeling can be used to predict the concentrations of estrogenic compounds and estimate the exposure-response relationship in fish. A model was employed to determine the spatial and temporal distribution of estrone (E1), estradiol (E2), and ethinylestradiol (EE2), key estrogens that are associated with intersex. The emission, transport, and fate (ETF) of these compounds were simulated in ~80-km reach of the Grand River from 2007-2015. The modeled section included the two major WWTPs in the watershed (Kitchener and Waterloo WWTPs), one of which (Kitchener) underwent major process updates (nitrification) in 2012. The emissions of estrogens from the WWTPs were first estimated using population demographics, excretion rates, and removals through the plant. Their transport and fate in the receiving water were then predicted using a mechanistic water quality model (WASP). The model estimated relatively high emissions of E1 from both WWTPs. E1 was also predicted as the most abundant in the Grand River followed by E2 and EE2. The transport of the estrogens (advection) was observed as the primary mechanism for their distribution in the river and, therefore, flow was an important factor that influenced the environmental exposure. The highest predicted total estrogenicity in the river was associated with the Kitchener WWTP during the pre-upgrade with a low-flow (≤ 11 m3/s) average concentration of 3.4 ± 0.9 ng/L E2 eq. The average concentration dropped to 0.7 ± 0.1 ng/L E2 eq. when the upgrades were implemented. The simulated average total estrogenicity was 0.45 ± 0.1 ng/L E2 eq. below the Waterloo WWTP and the river concentrations were predicted to persist during low flows, such that they may influence the total exposure below the Kitchener outfall located ~20 km downstream. The ETF model was extended to explore the relationship of predicted total estrogenicity and field-observed intersex in rainbow darter (Etheostoma caerulum). The distribution of intersex in the Grand River was adequately described using the four-parameter Hill equation for dose-response relationship (R2 of 0.76 and 0.80 for incidence and severity respectively). High occurrence and severity of intersex were associated with fish exposure to ≥10 ng/L E2 eq. while concentrations that are ≤0.1 ng/L E2 eq. were predicted to cause minimal expression of intersex. The model projects that low levels of intersex will be observed after upgrades at both WWTPs are implemented. This study also predicted that estrogenicity levels associated with the currently proposed thresholds of exposure do not lead to adverse effects in rainbow darter, thus verifying the applicability of such recommendations. The presence of estrogens and other organic micropollutants (OMPs) in water remains a major challenge as conventional treatment processes are not designed to remove these contaminants. Innovative approaches are needed to protect the public and environment health from these chemicals. Titanium dioxide (TiO2) is a potential advanced treatment option for OMPs that has recently attracted worldwide attention. Upon photoactivation by UV, highly reactive hydroxyl radicals that can degrade organic compounds are produced. Unfortunately, studies that employ TiO2 for the removal of OMPs require the use of solvents such as methanol to dissolve the compounds in the test solutions (i.e., resolve solubility issues). Although these carrier solvents can act as hydroxyl radical scavengers, it was found that up to 0.002 % methanol v/v could be added without having a major effect on treatment performance for the selected OMPs. Despite this result, removal of the use of carrier solvents from future studies is desirable. Two TiO2-based membrane materials were tested for their efficiency to remove a mixture of OMPs using UV-LED as the light source (under 0.002% methanol v/v). The materials were synthesized and immobilized onto different membrane supports using the (1) sol-gel, dip-coating method with quartz fiber membranes (QFT) and (2) thermal-chemical oxidation of porous titanium sheets (PTT). The resulting treatments were selective such that negatively charged compounds were well-removed by PTT, while the positively charged ones were degraded efficiently by QFT. Neutral compounds remained recalcitrant during the treatment. The study suggested that for these materials, surface charge interactions play a major role in the removal of OMPs. This result is advantageous if specificity in treatment is required and may be optimized by simply adjusting the pH conditions. PTT was additionally tested for its efficiency to remove estrogens (E1, E2, EE2, estriol [E3], and bisphenol A [BPA]) and reduce their estrogenic activity under different pH conditions (pH 4, 8, and 11). All compounds were removed efficiently (except E2) with treatments at pH 4 and 11 showing the most and least efficient removals respectively. Although E2 was poorly degraded, the total estrogenicity of the mixture was substantially reduced and followed a similar trend as for chemical removal. Although the experiments were completed at bench-scale, the results suggest that UV/TiO2 is a promising new approach for the removal of OMPs. In summary, this thesis estimated the emission, transport, and fate of key estrogens (E1, E2, and EE2) in the Grand River via modeling. It also provided an exposure-response relationship between estrogenicity and intersex that verified the thresholds recommended by several studies in Europe and North America. Although additional work is required to improve the predictions, the model can be employed to investigate future exposure conditions and management actions. This thesis also demonstrated the potential of UV/TiO2 as a remediation option to treat surface waters contaminated with estrogens and a mixture of OMPs. Further investigations on the material synthesis and UV/TiO2 treatment configurations are essential for future large-scale operation.