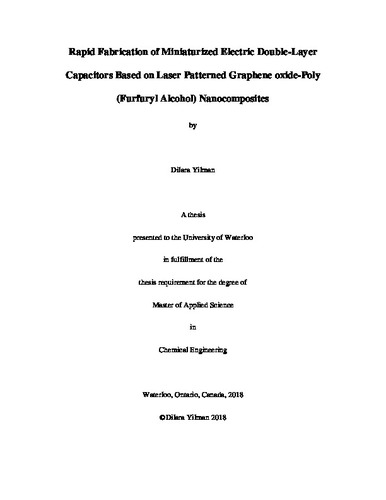 Miniaturization of various technologies has accelerated and drives new requirements for energy harvesting and storage solutions to power such devices. Reduction in size and designs requiring mechanical flexibility fuel the development of new materials and fabrication processes. The most advanced solutions to date have been to engineer thinner, more flexible rechargeable batteries. However, their short cycle-lifetime due to the intrinsic chemical nature of their energy storage mechanism, their low power density, high cost and safety concerns limit their application in variety of areas. For long-term electronic use in health-monitoring, smart-implants and the internet of things, a new form of power source which no longer requires replacement and offers consistent performance is needed. These concerns can be addressed if another energy storage technology is considered – the electrochemical supercapacitor. Such devices are generally reliable, offer long lifetimes, are safer and can be operated efficiently at high power. However, they typically store less energy per unit mass or volume than batteries. This thesis focuses on the development of miniaturized supercapacitors with improved performance as an energy storage solution for self-sufficient, micro-scale, and flexible electronics. Specifically, a type of supercapacitor called an electrical double-layer capacitor (EDLCs) is well known for high-power capabilities and a long-lasting cycle-life, typically above 100,000 charge and discharge cycles. The approach adopted in this study aims to improve the energy density using sustainable materials through a scalable and cost-effective fabrication technique. We will demonstrate that a polymer resin formed from an inexpensive monomer derived from waste biomass such as corn husks can be carbonized into a high surface area, electronically conductive material using a commercial CO2 laser. High resolution laser patterning of electrodes onto this material results in a micro-supercapacitor with much improved performance compared to state-of-the-art flexible and miniaturized supercapacitors. This thesis work initially focused on the understanding and development of laser irradiation as a fabrication technique using commercially available carbonaceous materials such as commercial Kapton® polyimide films as well as lab-made graphene oxide. A complete understanding of the variables involved in the fabrication process helped to optimize the laser irradiation technique. This achieved the highest reported micro-supercapacitor energy density compared to published research on similar materials. The main focus of this work was to develop an improved electrode material in terms of both cost and performance that could be laser activated in a similar way. To this end, we hypothesized that poly (furfuryl alcohol) (pFA), which is known to form a dense, microporous glassy carbon upon conventional heat treatment, might be a good candidate material for more effective laser activation. Several methods of polymer synthesis from the low cost, abundant, biomass waste derived monomer of pFA were explored to create a laser-inducible substrate including acid-catalyzed emulsion polymerization and bulk resinification. Surprisingly, despite a high yield conversion to carbon using conventional heating, the neat material could not be carbonized with the laser system. However, the addition of a small amount of graphene oxide was found to catalyze the formation of the carbonized structure which ultimately led to an improved supercapacitor. The optimum pFA synthesis conditions and the effect of graphene oxide incorporation were explored to maximize device performance. In each case, evolution of the carbonized structure was investigated by Raman and X-ray photoelectron spectroscopy. The resulting micro-supercapacitors boast a simple, inexpensive and rapid fabrication technique that are promising for future device applications. Notably, optimized electrodes achieved the highest specific areal capacitance presented in literature compared to other laser irradiated carbon precursors. The specific capacitance has been improved four times (4x) from literature’s highest measurement at 31 mF/cm2 to 147 mF/cm2 during this thesis work. pFA is heralded as a new renewable and environmental friendly energy storage source; recycled from common biomass waste into the solution to today’s most pressing micro-electronics need - power.