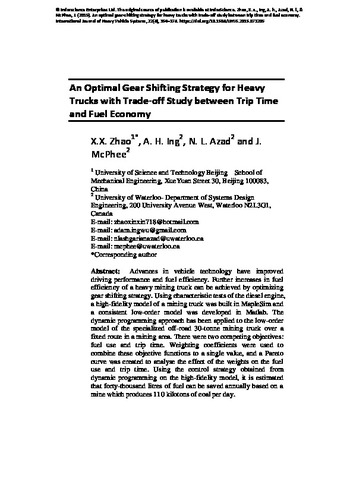 We show how the fuel efficiency of heavy mining trucks can be improved by optimising the gear-shifting strategy. Using characteristic tests of the diesel engine, a high-fidelity model of a mining truck was built in MapleSim and a consistent low-order model was developed in Matlab. Dynamic programming was used to optimise the low-order model of the specialised off-road 30-tonne truck over a fixed route in a mining area. There were two competing objectives: fuel use and trip time, which were combined in a single objective function using weighting coefficients. A Pareto curve was created to analyse the effect of the weights on the fuel use and trip time. Applying the control strategy obtained from dynamic programming to the high-fidelity model, it is estimated that 40,000 L of fuel can be saved annually for a mine that produces 110 kilotonnes of coal per day.