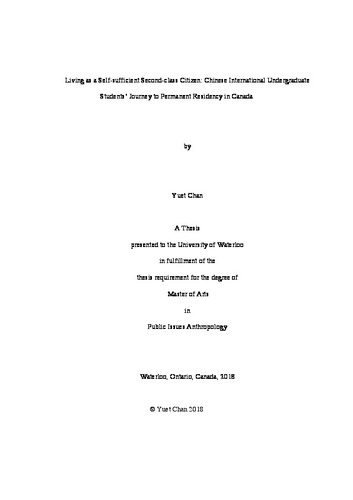 In recent years, Canada has become one of the world’s most popular destinations for studying abroad, and China has become the top sending country of international students to Canada. In Canada’s 2015 International Student Survey, more than half of international students indicated an interest in applying for permanent resident status following graduation. Meanwhile, the deflation of Western degrees in the Chinese market and recent spate of media coverage circulated portraying the outbound Chinese students as low-quality students have created barriers for studying abroad returnees for seeking desirable employment in China. Thus, it is logical to estimate that a considerable percentage of current Chinese international students will eventually become Canadian citizens. During my undergraduate years as an international student at the University of Waterloo (UW), I heard many of my fellow Chinese international undergraduate students express their strong and sustained desire to stay permanently in Canada but complained about Canada’s “backwardness” and its “lack of urban vitality”. Such irony sparkled my scholarly interest and I decided to conduct an ethnographic research on the Chinese undergraduate student community at UW. My thesis looks at the University of Waterloo’s undergraduate students’ aspirations and perspectives on becoming permanent residents in Canada. Specifically, I examine how they envision their future in Canada in relation to their individuality, self-happiness and self-satisfaction, neoliberal potentials, moral personhood, and skepticism toward Canadian multiculturalism.