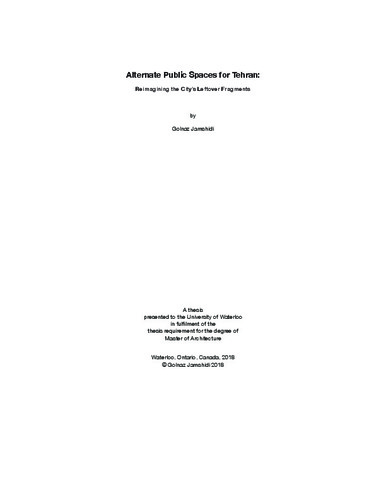 Public spaces are publicly owned spaces where people may interact freely with other citizens. A public place promotes social interactions and creates tolerance for diverse interests and behaviours. But in Tehran, many public spaces are not actually accessible to the public. Tehran, the capital of Iran, is a developing megacity with more than 8.8 million residents sprawling over an area of more than 730 square kilometres. The city has experienced a sustained process of densification since before the revolution in 1979. Due to the geographical boundedness of the city by mountains to the north, east, and west, and the desert to the southwest, Tehran has nowhere else to grow but to densify. Influenced by this rapid densification, public and private resources have mainly been concentrated on constructing more residential, commercial and institutional buildings. In this process, the importance of open public spaces has been lost. On the one hand, political shifts in Tehran over the last several decades have caused public life to migrate in part of the private realm. Many activities still considered desirable by citizens, such as socializing, performances, or even interaction between genders, have been declared illegal by the Islamic government. These legal restrictions have resulted in a reduction of public activities which means that they cannot be accommodated within the current public spaces of Tehran. On the other hand, the neoliberal commodification of public spaces and the development plans of Tehran in the past decades have resulted in the creation of very large public spaces (mainly parks) distributed unevenly around the city. These spaces are far from the daily life of most citizens and their formal arrangements are abstracted from the diversity of activities desired by a diverse population with a range of spatial needs and desires. Therefore, it is crucial to imagine a new breed of public space in Tehran, whose distribution will match the contours of daily life. These interventions will have to be smaller and more local to be able to respond with agility to the spatial needs of the whole range of public activities. Finding available space in this dense city for these new public spaces is not easy. Some of the few leftover fragments of the city are the residual spaces created by infrastructural networks. The publicly owned spaces scattered around Tehran under urban bridges present immediate potential. This thesis project reimagines these leftover spaces as potential sites of intervention and rearticulates them as networked, multiscalar, performative, and contextualized typologies for alternative public spaces in Tehran.