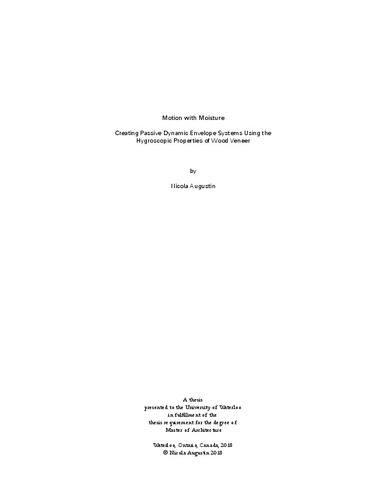 This thesis presents research into the creation of an autonomously responsive envelope system capable of adaptation to variation in relative humidity through the use of wood veneer and its hygroscopic material properties. As an alternative strategy to the extensive, energy-intensive, technological systems characteristic of contemporary responsive envelopes, dynamic systems using hygroscopic materials are both low-cost and low-tech while also producing adaptation without consumable energy input or external control. Produced is a meteorosensitive, semi-permeable, passive facade that aims to enhance both the physical and physiological comfort of interior spaces through moderating airflow and light infiltration. The facade is an assemblage of expanding, hygroscopic tubes, formally based on the principles of fluid dynamics outlined by Bernoulli’s principle and functionally implemented by the Venturi tube, to orchestrate airflow from exterior to interior. The performance of the hygroscopic facade is tested using computational fluid dynamics software and is compared against the performance of a standard Venturi tube assembled in the same manner. The results of this testing show that despite a cross sectional difference from the standard Venturi tube, the hygroscopic mechanism is capable of increasing airflow into interior spaces through the purposeful creation of a low pressure zone within the mechanism. Optimizing the performance of the mechanism is done through a biomimetic transfer of both formal and functional intelligence from the biological precedents of the Ipomoea flower and the conifer cone as found by Ross Koning, Wouter van Doorn et al., and Kahye Song et al. As well as, material studies performed by Steffen Reichert, and Artem Holstov et al. are traced to understand the performance and characteristics of the wood veneer as a bilayer composite that allows the mechanism to undergo repeated transformations and achieve variability of expansion from one end of the mechanism to the other. The direct integration of biological precedents within architecture asserts that building materials can be seen as productive entities, passively attuned to the natural rhythms and variability of the external environment, while maintaining flexibility for functional implementation as self-sufficient, adaptive facades.