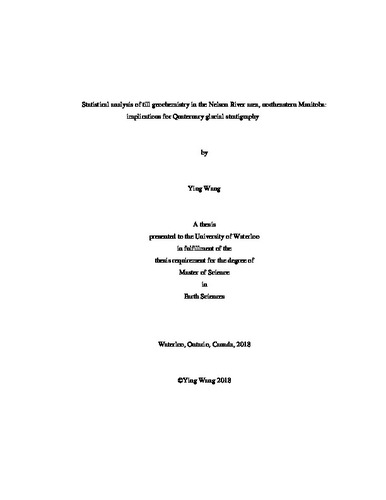 The Hudson Bay Lowland (HBL) contains a unique sedimentary record extending beyond the penultimate glaciation of the Quaternary. The complex interplay between two major ice dispersal centres (the Keewatin in the north and the Quebec-Labrador centre in the east) produced multiple till sheets in northeastern Manitoba containing Canadian Shield and carbonate rock detritus in variable proportions. In the Gillam area, the existing till stratigraphic framework consists of four tills: the Sundance Till, the Amery Till, the Long Spruce Till, and the Sky Pilot Till. This till classification is based on clast lithology, matrix color, matrix carbonate content, and clast fabric. One important aspect of this classification is that it has been established at sites where rare interstadial or interglacial organic beds separate certain tills, which facilitated their identification. The main problems are A- these organic beds seldom occur away from type sections and B- the tills show considerable overlap in their sedimentary characteristics. In addition, descriptive inconsistencies exist in the literature and different criteria have been used by various researchers over time. Altogether, these problems make it challenging to use the existing till stratigraphic framework to describe new till sections, understand the regional glacial sedimentary record, and help drift exploration. New approaches need to be tested to verify the stratigraphic framework, determine provenance of the tills and help with regional interpretations. Till matrix geochemistry contains information which can be used to discriminate till units and determine their provenance, but it has not been used widely in the HBL region in previous till studies. The aim of this thesis is to assess whether tills can be discriminated on the basis of their matrix geochemistry. To this end, multivariate statistical analysis is applied to a till geochemistry dataset. The methods used include k-means clustering and principal component analysis (PCA) to gain insights into spatial and compositional trends. The integration of cluster analysis and PCA, and spatial visualization of results in ArcGIS, allow for the classification and examination of till groups statistically and spatially. The number of clusters was determined through visual inspection of a scree plot based on the sum of squared error (SSE) in the dataset. The PCA configuration of the six geochemical clusters (groups) was then examined and the groups were analyzed and interpreted in terms of composition and possible provenance. While five of the six groups have a relatively clear compositional signature near their centroid in multivariate space, the majority of samples (n=80) fall within a mixed group that considerably overlap in the overall PCA configuration with all other groups. This means that while specific till samples have distinct compositions, several samples within each group are not clearly separated from the large mixed group, suggesting a till composition continuum and a complex (mixed) provenance for most till samples. Based on this thesis, it can be concluded that 1) considerable overlap in till matrix composition exists across and within all identified till sheets; and 2) stratigraphic correlations away from type sections are thus greatly hindered by the compositional variations/continuum. Tills within the Manitoba HBL are interpreted as a palimpsest product of sediment provenance overprinting and inheritance related to a long glacial history and complex changes in ice flow and subglacial conditions responsible for till production and re-entrainment through time. Till matrix geochemistry, however, provides complementary information on the proportion of shield vs platform contributions in tills and this is useful for the interpretation of till and the glacial history alongside other data such as clast lithology and till fabrics.