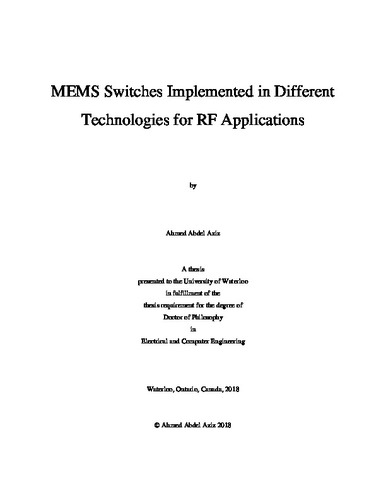 Microfabrication technologies allow building micro-scale and nano-scale mechanical switches. Despite the fact that the solid-state switches exhibit superior performance as compared to their micro-mechanical competitors in terms of speed and lifetime, mechanical switches exhibit various attractive features such as low power consumption, high linearity, high isolation and low loss. This work summarizes the design, fabrication and testing of several micro-mechanical switches for Radio Frequency (RF) applications and using different microelectromechanical systems (MEMS) technologies. The implementation is carried out through four approaches for realizing MEMS switches. In the first approach, the switches are built by post-processing chips fabricated in a standard complementary metal-oxide semiconductor (CMOS) fabrication process. The structural layers of the electrostatic MEMS switches are implemented in the four metal layers of the back end of line (BEOL) in the standard CMOS 0.35µm process. In addition, an enhanced post-processing technique is developed and implemented successfully. The switches presented include a compact 4-bit capacitor bank, a compact 4-bit phase shifter / delay line, a W-band single pole single through (SPST) series capacitive switch, SPST shunt capacitive switches with enhanced capacitance density, and a proposed compact T-switch cell with metal-to-metal contact switches. In the second approach, a standard multi-user MEMS process is implemented. Electrothermal and electrostatic MEMS switches designed, fabricated and tested for low-frequency high-power RF applications using the MetalMUMPs process. The devices include a 3-bit capacitor bank, a compact discrete capacitor bank that can be configured for 2-bit / 3-bit operation depending on the stroke of the electrothermal actuators, and a novel rotor-based electrostatic multi-port switch. In the third approach, an in-house university-based microfabrication process is developed in order to build reliable MEMS switches. The UWMEMS process, which was developed at the Center for Integrated RF Engineering (CIRFE), is used in this research to fabricate novel switch configurations. Moreover, the capabilities of the standard UWMEMS process are further expanded in order to allow for building geometric confinement (GC) or anchorless switches and other novel switches. The gold-based UWMEMS switches presented include compact T-switches, R-switches and C-switches, GC SPST shunt and series switches. Additionally, other novel switch architectures such as the hybrid self-actuation switch (HSAS) and thermally-restored switches (TRS). In the fourth approach, which is a hybrid approach between the first and third approaches, the MEMS switches are built and packaged in one fabrication process, and without the need for sacrificial layer, by means of a wafer-level packaging technique. Adopting silicon wafers for the microfabrication necessitates using silicon-core switching, which offers few attractive advantages as compared to the metal-based switches implemented by the third approach. The designed switches to be fabricated in a state-of-the-art industrial facility include a variety of simple SPST contact-type switches as well as compact designs of T-switch, C-switch, a novel four-port gimbal-based switch (G-switch) introduced in this work, SP4T cells, and a seesaw push-pull SPST switch design is included.