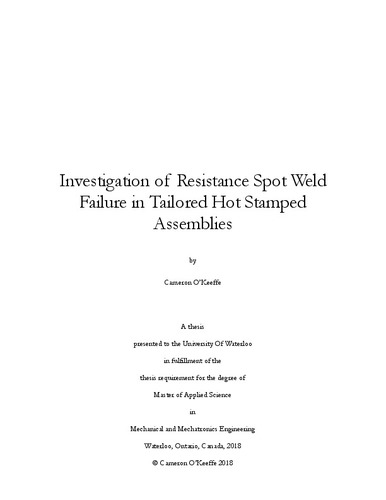 This thesis presents the results from the mechanical characterization of resistance spot welds within hot stamped USIBOR® 1500-AS steel sheet (1.2 and 1.6 mm thickness) with tailored properties. Three parent metal conditions, ranging from a fully martensitic (495 HV) to a mixed ferritic-bainitic microstructure (211 HV), were obtained using in-die heating (IDH) to control the cooling (quench) rate during the hot stamping process. Flat sheets and hat channel geometries were produced through die quenching in which the die was maintained at 25, 400, and 700°C with strengths of 1,548, 817, and 671 MPa, respectively. The as-quenched sheets were resistance spot welded and mechanically tested in lap shear, cross tension, V-bend, and JIS tensile coupon geometries to characterize the mechanical response of single welds under various loading orientations. Hardness testing was conducted on the welds to investigate the hardness (strength) distribution in the welded region, heat affected zone (HAZ) and parent metal. The drop in hardness within the HAZ increased as the parent metal strength increased, such that the hardness of the HAZ was similar for all three spot welded parent metals (211-318 HV). In the mechanical testing, strain localized in the HAZ (or nugget) with the result that the strength of the welds was relatively constant for all die quench conditions. For the range of material conditions considered, the lowest weld strength 4.0-4.5 kN was measured in the cross-tension tests compared to 12.1-15.0 kN for the lap shear tests (data for 1.2 mm sheet). A new mechanical test, termed the “Caiman”, was developed to study groups of welds under both static and dynamic Mode I structural loading. Channel sections comprising of fully quenched material as well as hot stamped components with tailored, lower strength flanges were joined via spot welding. The experiments subjected the welded regions to Mode I tensile loading to investigate how failure propagated along the spot weld line. It was found that the energy absorption within the welded connections was higher for the lower strength (tailored) parent metal conditions, largely due to activation of plastic deformation within the parent metal as opposed to the fully martensitic condition for which deformation was confined to the weld nugget or HAZ. High speed thermal imaging was shown to be an effective method to detect failure of individual welds and track failure propagation within the welded assembly due to local adiabatic heating associated with weld fracture or pullout. Temperature increases of 7 °C were typical of quasi-static loading whereas increases of 80 °C were observed under dynamic loading. It was determined that initiation of the first weld failure was delayed slightly under dynamic loading (relative to quasi-static); however, failure propagation after initiation was more rapid for dynamic loading for a given load point displacement. Numerical simulations of the lap shear and cross tension single weld experiments were used to calibrate weld failure models within the commercial finite element software LS DYNA, with relatively good correlation to the experimental data. The calibration exercise revealed the importance of simulation of the post failure response, in particular the use of the “fade energy” numerical parameter, to more accurately capture the energy released during the weld fracture event. The weld failure models calibrated from the single weld tests were applied to simulate the static and dynamic Caiman experiments without additional “tuning”. For the quasi-static Caiman simulations, the predicted load-displacement response and failure propagation were relatively accurate, with higher errors for the fully martensitic case since the HAZ was not modelled. The dynamic simulations aligned relatively well with the experimental results.