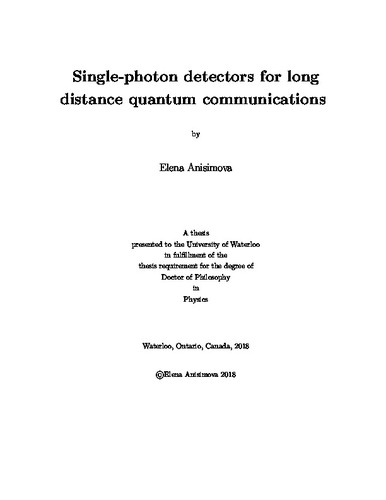 Quantum communications and quantum cryptography are developing rapidly during the last decades caused partly by a fast progress in quantum computing. Quantum cryptography provides an unconditionally secure way of communicating whereas traditional classical cryptographic protocols are likely to be broken by super powerful quantum computers. In the past few years distances covered by quantum communications have increased by an order of magnitude. To provide a global coverage for the quantum networks, a satellite based quantum communications is the most promising solution. As an emerging field, QKD systems are still under evolution process. Despite outstanding security proven theoretically, it has loopholes caused by their implementations. To test QKD, find the possible loopholes and suggest ways to fix them, is a job of many scientific groups. In this thesis I start with presenting my work for a securing test of a commercial QKD system Clavis2. A Trojan-horse attack on Bob's apparatus was prepared by testing reflections and transmissions of all optical components in Bob's scheme. The attack was implemented and found to be unsuccessful at the tested wavelengths due to afterpulsing effect in Bob's single-photon detectors reacting to the bright light attack pulses. Three chapters of the thesis are dedicated to custom built single-photon detectors (SPDs) based on commercial Silicon avalanche photodiodes (APDs). Those detectors demonstrate parameters that altogether are not possible to find in commercially available SPDs, especially if combined with a very compact size. One of the in-lab-built SPDs was implemented in 143 km teleportation experiment, where a low dark count rate was crucial for the success of the experiment. The next generation SPD is already built, characterized and ready to be implemented. Another 4-channel SPD was built as a prototype for a quantum satellite SPD. It has light weight, low electrical power consumption, low dark count rate and decent other parameters. It was used in the airborne demonstration of QKD receiver payload experiment, when a secret key was successfully generated between a moving aircraft and a ground station. SPDs installed on a satellite have to be able to work in the harsh space environment during a mission life time. Space radiation dramatically increases dark count rate of APDs. The last project presented in the thesis committed to a radiation test of three types of APDs and one type of photo multiplier tube. The experiment included characterization of all SPDs before and after irradiation by four levels of proton radiation, equivalent to 3 months - 2 years duration in a 600 km low Earth orbit. Three methods for mitigating radiation damage were tested and found to be successful with perspective to use some of them on a quantum satellite to extent life time of SPDs. To summarize, this work makes a contribution to the development of SPDs for global quantum communications.