Exploring factors that contribute to between-subject variability of reaction time 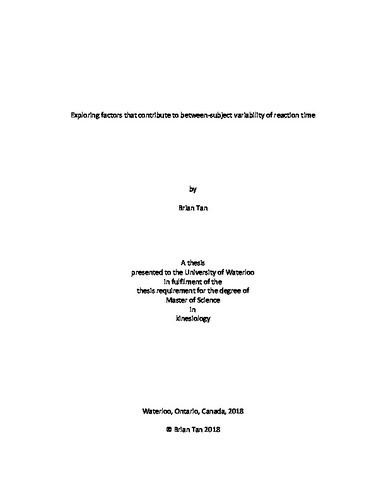 For well over a century reaction time has provided researchers with a method to quantify information processing speed. Defined as the interval of time between the presentation of a stimulus to the onset of a response, reaction time as a proxy of the speed of central nervous system events has allowed researchers to reveal underlying mechanisms of information processing control. The differences in reaction time between individuals is an interesting phenomenon that is sometimes disregarded as biological noise but could reveal further insight into the determinants of central nervous system speed of processing. The primary aim of this work was to explore the factors that contribute to such between-subject variability in young health adults to determine if differences were reflective of trait differences or simply random fluctuations across repeated testing and task conditions. Specifically, this study investigated the performance of visual and tactile reaction time tasks over two sessions to capture the day to day stability and task generalizability of reaction time. Genetic samples and nerve conduction velocity were also collected to speculate on potential biological markers that may relate to reaction time performance. ICC results demonstrated that reaction time of individuals were more closely related between days than between individuals for a range of tasks that differed in modality (visual and tactile) and difficulty levels (simple and choice). Interestingly, reaction time performance was found to have a stronger association between tasks of varying difficulty but not across task modality. Furthermore, while this study relied heavily on central tendency it was also found that analyzing the distribution of reaction times also revealed important within subject variability. DNA results found no association between APOE or COMT allele and reaction time performance. Ulnar nerve conduction velocity at the elbow also was not associated with reaction time. The results from this thesis support the importance of stable, person-specific traits in determining reaction time while also emphasizing the potential impact of state factors. Alternative expressions of reaction time, such as variability and distribution, are also likely to be important to understanding between subject differences that is not revealed by traditional central tendency measures. Outcomes from this work will help to inform and contribute in supporting the use of reaction time as a stable predictor of central nervous system processing speed to indicate declining or improving performance. Potentially, tracking reaction time performance may be important in identifying potential risk of injury related to decreased speed of processing or as a marker of improved performance in training.