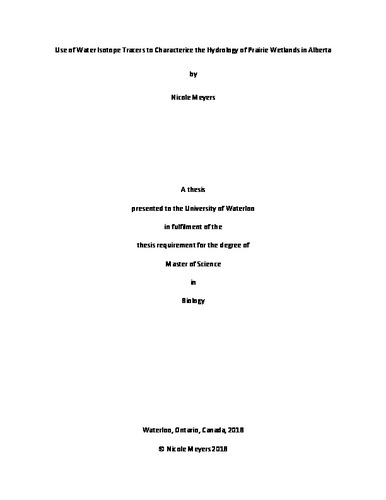 Our understanding of prairie wetland hydrology comes primarily from a handful of long-term research stations, but generalizing from a few intensively monitored areas to the entire prairie pothole region requires assumptions of meteorological conditions and landscape characteristics that may not be justified. To test whether generalization about the primary source of water, the influence of evaporation, and the sensitivity of water budgets to surrounding land use can be extended across the prairie pothole region, we require synoptic sampling across a more spatially extensive dataset. Temporal synchrony in hydrologic metrics across a large study region would support extrapolation, by suggesting that the same or highly correlated drivers are influencing hydrologic metrics over large areas. The aim of this study is to assess the relative importance of snowmelt and rainfall sources of precipitation and the relative evaporative influence in prairie pothole wetlands of varying permanence class. The study area includes 96 wetlands in the Parkland and Grassland Natural Regions in Alberta and contrasts influence of a normal climate year (2014) with a relatively dry year (2015) on wetland hydrological conditions. Water samples were collected at routine intervals during May-August, and analyzed for stable isotope ratios of oxygen (δ18O) and hydrogen (δ2H). An isotope-mass balance approach was used to generate hydrologic metrics (isotopic composition of source water, evaporation to inflow ratio) to assess the relative roles of snowmelt, rainfall and evaporation in the wetland water budgets. A measure of synchrony was used to test the generality of seasonal patterns of change in hydrological variables among wetlands across the large study region. Findings support prairie wetland hypotheses from intensively monitored research stations. Firstly, all study wetlands, regardless of Natural Region or permanence class, receive the majority of their input water from snowmelt during spring, and summer rainfall does little to replenish these systems. Differences between hydrologic metrics in 2014 and 2015 were evident, but were not apparent between Grassland and Parkland regions in a normal climate year, indicating that meteorological conditions are a dominant driver of prairie wetland hydrology. However, differences between regions were evident in the relatively dry year, indicating that climate change may result in greater disparity in hydrologic function between the two natural regions. Despite differences between regions that emerged in the dry year, synchrony was actually higher in a dry year (2015) as compared to a normal climate year (2014). Findings reveal that the conceptual understanding of PPR hydrology, garnered from research stations in Saskatchewan and the United States, is applicable to the Alberta PPR. Extremely high synchrony results in hydrologic metrics indicate that PPR hydrology is driven by broad-scale processes, such as climate, rather than site-level differences.

Nicole Meyers (2018). Use of Water Isotope Tracers to Characterize the Hydrology of Prairie Wetlands in Alberta. UWSpace. http://hdl.handle.net/10012/12924