Approaching Vertical: A Guide Through Land-Use in Ontario’s Niagara Escarpment 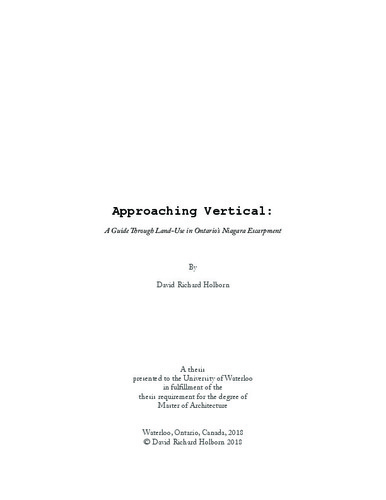 Ontario’s Niagara Escarpment is a landscape 450 million years in the making. Over this immense time line, great natural forces of the earth have aggregated, eroded, and carved this landscape, a 725-kilometer scarp face stretching from Niagara Falls to Manitoulin Island, informing much of the land mass in Southern Ontario. Despite the minuscule fraction of geologic time that humans have occupied this region, the scale of our land-use is abundantly evident throughout its depth, from the marks and scars of industrial extractions to the layering of infrastructural erections used to inhabit the land. In a reciprocal fashion, the significance of this landform underlies the urban, social, economic and cultural development of human occupation in the region. The geologic landscape of the Niagara Escarpment forms the backbone of Southern Ontario. Humans are a geological force, from the elemental matter of our physical being to our extended use of the planet’s material resource, our species is rooted in the deep history of the Earth. Likewise, as proposed with the introduction of the Anthropocene epoch, the extended effects of human action are embedded in the immanent future of this world as a stratigraphic layer in its geologic makeup. The landscape is defined by this three-dimensional stratigraphy, at once a homogeneous entity (place) and heterogeneous assemblage (site). Despite these complexities, the understanding of the land is often relegated to its surface, a keen focus on the horizontality of landscape; represented, interpreted and experienced through two-dimensional projections onto a flat plane. The new realities brought forward by the Anthropocene require altered sensibilities towards our understanding of landscape and our agency within it. The development of our contemporary society is caught in a state of acceleration, an exponential curve ever steepening, and we are rapidly approaching a world which exists at a right angle to history. In this accelerated time scale, geology can no longer be considered an exploration of past conditions of the earth, it is becoming more and more evident that the geologic is a present condition which we are actively shaping. The landscape of the Niagara Escarpment is the ideal site through which to explore these emerging sensibilities as it naturally exposes its underlying form on a vertical surface, revealing a stratigraphy of geologic processes that encompasses the transformations of both human and non-human agents. Borrowing conventions from the field of geology to study and understand the world from the side, in section and elevation, and a through a broad range of temporal scales, this thesis seeks to present an alternate approach to the earth’s landscape to include the expanding depths and heights of the “surface” we occupy. Part One of the thesis, A Journey Through Land-Use, forms a collection of stories on the use of the land, relating the complex local histories of this specific landscape to a larger context of landscape interpretation. Part Two, A Stratigraphic Guide to the Niagara Escarpment, brings these revelations into immediacy, formalized in a guide that presents an altered interpretation of the Escarpment landscape through its elevation and section, focusing on the physical and ephemeral depths of the landform as it intertwines with networks of cultural and industrial land-uses. The goal of this localized study is to reveal the broader condition of connections and intersections between the natural world and the humans that build on it and with it, interpreting the geologic not as a thing in itself, but a tracing of these associations through a vast range of temporal and physical scales. Through this interpretation, representation, experience, and use of the land, the landscape is expressed as a complex assemblage of human and non-human factors rather than an ontologically distinct entity. What we create, where we create it, and the material from which it is created is a holistic, geologic being. As we approach new verticals within this world, these sensibilities should guide our agency in the continual transformation of this deep surface.