The Lipopeptide Antibiotic Daptomycin: Its Interaction With Calcium And Membranes And The Effects Of Membrane Lipid Composition On Its Activity 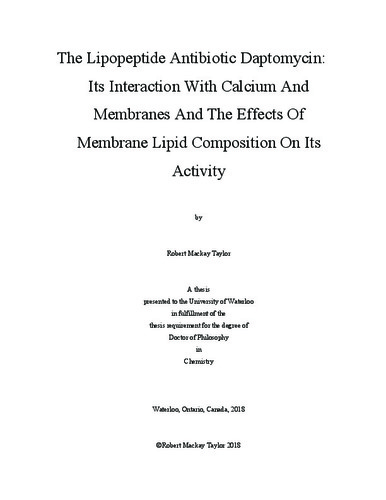 Daptomycin (Dap) is a calcium-dependent cyclic lipodepsipeptide antibiotic used clinically to treat infections with pathogenic Gram-positive bacteria, including methicillin-resistant Staphylococcus aureus (MRSA). It targets the cell membrane, which must contain phosphatidylglycerol (PG) for activity. Although Dap was discovered over 30 years ago, its mechanism of action is still debated among researchers. Many action mechanisms have been proposed for Dap. The mechanism that has garnered the most attention involves Dap oligomerization in the cell membrane resulting in the formation of cation-selective pores, which lead to membrane depolarization and cell death. To further investigate this proposed mechanism of action, I here studied the interaction of Dap with calcium, the activity and pore-forming abilities of a Dap dimer, and the effects of membrane lipid composition on Dap-membrane interactions and pore formation. The stoichiometry of calcium to Dap in the presence of liposomes and how calcium concentration affects Dap oligomerization and membrane insertion was investigated using fluorescence spectroscopy and isothermal titration calorimetry. It was shown that Dap interacts with liposomes in two sequential calcium-binding events. The binding of the first calcium ion is suggested to cause oligomer formation of Dap in the membrane. The binding of a second calcium ion is suggested to cause a deeper insertion of this oligomer, followed, potentially, by translocation into the inner leaflet, ultimately forming a functional pore. The effect of Dap pre-oligomerization on antibacterial activity was studied via the synthesis and characterization of a Dap dimer. The dimer was prepared by connecting the N-termini of two Dap monomers via an octadecanedioate linker. It was anticipated that the dimer would decrease the entropic cost associated with oligomer formation. This would promote oligomer formation, thereby enhancing its activity. In contrast to expectation, the activity of the dimer was greatly reduced on vegetative cells yet was able to form cation-selective pores in liposomes. On bacterial L-forms, which lack a cell wall, dimer activity was close to that of the monomer. This suggests that the dimer was unable to cross the cell wall of vegetative cells, thus highlighting the role of the cell wall in Dap resistance. The effect of lipid acyl chain composition on Dap’s ability to interact with, oligomerize, and form pores in membranes was examined. Dap was found to insert into and form oligomers on phosphatidylcholine (PC)/PG liposomes containing either dimyristoyl (DMPC/DMPG), dioleyl (DOPC/DOPG) or dipalmitoleoyl (POPC/POPG) acyl chains. DMPC/DMPG lipids were found to support pore formation, while DOPC/DOPG and POPC/POPG lipids did not support pore formation. Only 1-5% of an added oleoyl chained lipid, regardless of head group, was necessary to prevent pore formation in liposomes containing dimyristoyl acyl chains. Permeabilization was regained when the molar concentration of Dap surpassed the molar concentration of the dioleoyl chained lipid present. This indicates a near-stoichiometric dose-response interaction of a dioleoyl chained lipid, DOPC, to Dap. The reason for the reduced permeabilization of Dap on DOPC/DOPG lipids was further investigated. Experiments indicated that the acyl chain unsaturation of dioleoyl chained lipids alone is not sufficient for the inhibitory effect of DOPC/DOPG lipids on Dap; thus, the greater length of oleoyl relative to myristoyl acyl groups appears to be important. Moreover, the inhibitory effect cannot be overcome by extending the N-terminal acyl residue of Dap itself. Overall, the findings in this thesis provide substantial new detail on the mode of action of Dap. They also shed light on mechanisms of bacterial resistance to Dap, and they help to reconcile some of the conflicting findings on Dap activity that were obtained with model membranes differing in lipid composition.

Robert Taylor (2018). The Lipopeptide Antibiotic Daptomycin: Its Interaction With Calcium And Membranes And The Effects Of Membrane Lipid Composition On Its Activity. UWSpace. http://hdl.handle.net/10012/12919