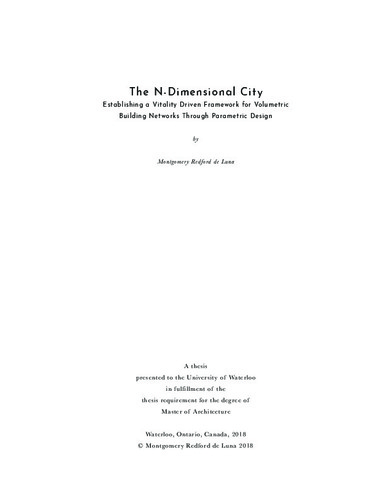 The architectural concept of a city within a city, or a three-dimensional urban realm, aims to engage the public and bring the vitality of the city into the building. This concept often manifests in the form of grade-separated pedestrian networks, promenades through buildings, roof terraces, sky-bridge connections between towers, and towers that morph together—creating the urban realm throughout volumetric space. The N-Dimensional City investigates a recurring theme of this “volumetric architecture” typology throughout architectural history from a critical perspective. While the type originated from the Soviet era social condenser as a means of creating social equity, volumetric architecture grew to the height of its popularity in capitalist North America with the construction of private building networks throughout the Modern era. Often initiated by the private sector and constructed piecemeal, without integration into the city’s master plan or regulations, many of these volumetric cities experienced a desolated ground plane and the amplification of existing social and economic problems. Rather than producing the social equity envisioned by the building type’s progenitors, the resultant profit-driven spatial organization reinforced segregation, inequality, and commercialism in these urban centres. With a contemporary resurgence of interest in volumetric architecture, signaled by the World Trade Center redevelopment competition in which almost all finalists produced a variation of the type, the thesis aims to resolve the apparent shortcomings volumetric architecture has in achieving its goal of vitality and equity throughout the entirety of a three-dimensional public realm. The thesis adopts the values instilled into Jane Jacobs’ work as its goal for volumetric architecture, including universal access to the city and its movement, inclusive communities, equitable economic opportunities, and a holistic increase to the city’s land value. The City of Toronto is taken as an ideal site to test the building type, as a city with both a history of quasi-public volumetric architecture including the PATH and the Eaton Centre, as well as a recent resurgence of the type in private developments such as City Place and Pier 21. Undergoing a rapid period of construction, the unrestricted powers of the Ontario Municipal Board have undermined the municipality’s ability to direct development in accordance with the Ontario Growth Plan—instead ruling a majority of cases in favour of the development industry against the advisement of the city’s planners. This regulatory vacuum produces a volatile environment for volumetric architecture, in which existing precedents have demonstrated the ability for a profit-driven building network to buttress the city’s existing socio-economic problems through what effectively became a spatial oligopoly and the privatization of the commons. In response to volumetric architecture’s ambition to create an extension of the public realm throughout three-dimensional space, the work of Jane Jacobs is used to form an understanding of how physical qualities of the built environment, designated as urban resources, produce vitality by catalyzing informal uses of public space. Adapting her work from the planar public realm of the old city, Jacobs’ sociological study is codified into a system of discrete actors and processes that can be replicated throughout the three-dimensional field, thus formulating a vitality-driven framework for the volumetric city. The thesis work takes a parametric approach, creating a custom tool written in Processing that simulates the development of the city over time and under a variety of regulatory and stylistic conditions by abstracting the city into a field of voxels with assignable properties. Negotiating the territory between architectural design, urban regulations, and economic forces of the development industry, the parametric tool projects an image of how a vitality-driven model of the volumetric city compares to its profit-driven counterpart, and to the traditional planar city. The N-Dimensional City reveals a not too distant future, prompting a reflection on the qualities of the city that we collectively value as a society, and how these can be developed by the architecture we build today.