Studies of the Growth Conditions, Plasmonic and Magnetoplasmonic Properties of Semiconductor Nanostructures 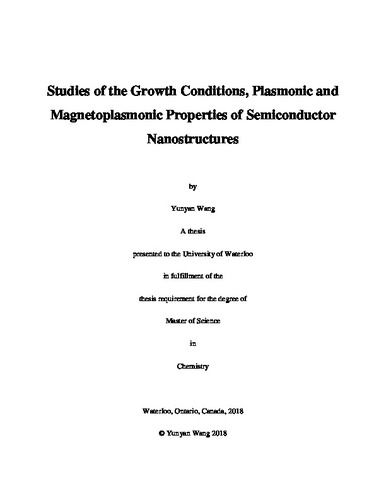 Magnetoplasmonic nanostructures, as a branch of multifunctional materials, have recently attracted research interests due to the coexistence of magnetic and plasmonic properties.1-4 To accomplish the simultaneous control of both functionalities, appropriate design of the material construction is necessary. This study attempts to explore the magneto-optical properties of plasmonic semiconductor nanocrystals (NCs), specifically the behavior of the excitonic transition and its correlation with the magnetoplasmonic properties of NCs. Furthermore, considering the potential application for spintronic devices, one-dimensional nanowires (NWs) is one of the best platforms,as they have been widely exploited in optoelectronic and magnetoelectronic devices. Thus, the growth of plasmonic semiconductor nanowires is worthwhile to investigate. The influence of localized surface plasmon resonance (LSPR) on magneto-optical properties are investigated in doped zinc oxide (ZnO) semiconductor NCs. ZnO, as a sort of n-type transparent conductive oxide (TCO), is an earth-abundant semiconductor with a direct band gap of 3.37 eV. In this study, indium-doped ZnO (IZO) and aluminum-doped ZnO (AZO) NCs have been successfully synthesized across various doping concentrations and all samples exhibit LSPR in the near-to-mid infrared region. For IZO NCs, the most intense plasmon absorption band is achieved for the sample with a starting In doping concentration at 10 %. A reduction of plasmon peak intensity occurs with a further increase of starting dopants concentration. However, for AZO NCs, the plasmon band continues to increase up to 30 % starting Al/Zn atomic ratio due to poor doping efficiency. The apparent blue shift of the band gap for both IZO and AZO NCs have been observed due to the Burstein-Moss effect. In the magnetic circular dichroism (MCD) spectra, the splitting of the excitonic transition under the external magnetic field indicates the complete polarization of free carriers, which could be attributed to the phonon-mediated plasmon-exciton coupling. More importantly, the carrier polarization induced by plasmon-exciton coupling could be maintained at room temperature and low magnetic field (less than 1 T) showing great potential for its applications into new spintronic and optoelectronic devices. In addition, the optimal growth conditions of gallium phosphide (GaP) NWs by the chemical vapor deposition (CVD) method are discussed as the initial step towards the synthesis of plasmonic III-V NWs. The growth of GaP NWs is generally accompanied by the unintentional formation of thick oxide coating, which may compromise the optical and electrical properties of NWs. Controlling and eliminating the as-formed outer layer during thermal evaporation growth of GaP NWs represents a barrier to the simple and scalable preparation of this technologically important material. The second part of this study systematically investigated the role of different parameters (temperature, hydrogen flow rate, and starting P/Ga ratio) in the synthesis of GaP nanowires, and mapped out the conditions for the growth of oxide-layer-free nanowires. Increasing all three parameters leads to diminished oxide layer thickness and improved nanowire morphology. Long and straight nanowires with near perfect stoichiometry and the complete absence of oxide outer layer are obtained for 1050 °C, 100 sccm hydrogen flow rate, and P/Ga flux ratio of 2.